The vest and spikes worn by two-time Olympic champion Coe in the 1500m at the 1984 Los Angeles Games and the vest worn by long jump world record-holder Powell at the 1991 World Championships have been among the hundreds of artefacts on display in the exhibition since it was officially opened by Coe on 18 April this year.

Today during the visit, the IAAF Heritage Collection received further permanent donations. The winning kit and competition numbers of Ashton Eaton and Brianne Theisen-Eaton from the IAAF World Indoor Championships Portland 2016 were generously donated by the couple.

The 2016 World Indoor Championships was a fairy tale event for Ashton, the multiple world and Olympic decathlon champion, and Brianne, the 2016 world indoor pentathlon champion, who married in 2013 and, as Oregon residents, were the promotional faces of those 2016 championships.

“It really is our pleasure to make these donations of our Portland 2016 competition jerseys and bib numbers,” said Ashton. “Thank you for starting the Heritage Collection and allowing us to be part of it.”

“To echo what Ashton said, this is a truly incredible thing Heritage is doing to promote our sport and preserve its history and we’re happy to donate,” added Brianne. “We thought it would be very cool if we both gave something from Portland 2016 since we both won gold and the location was so meaningful to Ashton and me.”

For Ashton, his Portland victory was his third world indoor heptathlon title for the USA, while Brianne’s pentathlon gold in the Oregon Convention Center in Portland was her second world indoor championships medal for Canada, following her silver in 2014.

The kit will be on display in Doha until the end of the championships. Next year it will feature in the World Athletics Heritage Indoor Display in Nanjing, China, which will be staged ahead of the 2020 World Athletics Indoor Championships in the city.

The IAAF Heritage World Athletics Championships Exhibition is open from 10am to 10pm every day (until midnight on Thursday, Friday and Saturday) and closes at the end of Monday 7 October. The exhibition is located in a 400m2 space on the third floor of the City Center Doha, 4th Street, West Bay Area. 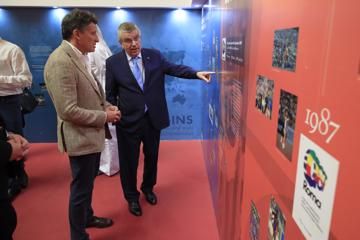