It was a year of world record-wrecking carnage. Every global men’s mark from 1000m up to 30,000m was savaged in the track and field frenzy that was 1965.

The rampant Ron Clarke was the chief culprit, claiming 11 of the 23 ‘victims’, all the way from two miles to one hour. The towering Australian had the first word, clocking 13:34.8 in the Tasmanian state capital, Hobart, on 16 January. The final say, however, belonged to his great rival Kip Keino.

The anniversary coincides with the revered father of Kenyan distance running making a generous donation to World Athletics Heritage Collection and the Museum of World Athletics (MOWA) of the silver trophy he collected for one of the sizzling performances with which he set European tracks alight in the northern hemisphere summer of 1965.

Running the Morley Mile at the White City Stadium in London on 30 August 1965, Keino became the first African to run a sub-four-minute mile, wowing the packed English crowd with a 3:54.2 clocking that made the middle distance novice the third-fastest man of all time: behind Frenchman Michel Jazy’s two month old world record of 3:53.6 and New Zealander Peter Snell’s former global mark of 3:54.1. “I didn’t know I could run anything like as fast as that at a shorter distance,” he said.

He returned to London the following year, won the race again and was given the trophy in perpetuity.

Three days before his 1965 victory, Keino had made the first of his two marks on the world record books, smashing East German Siegfried Hermann’s 3000m time by six seconds with 7:39.6 in the Swedish coastal town of Helsingborg.

Keino beat Clarke in two out of three races on the European circuit, but by the time he travelled to New Zealand in November, the Australian had made two further improvements to the 5000m world record, running 13:33.6 in Auckland in February and then 13:25.8 in Compton, California, in June. 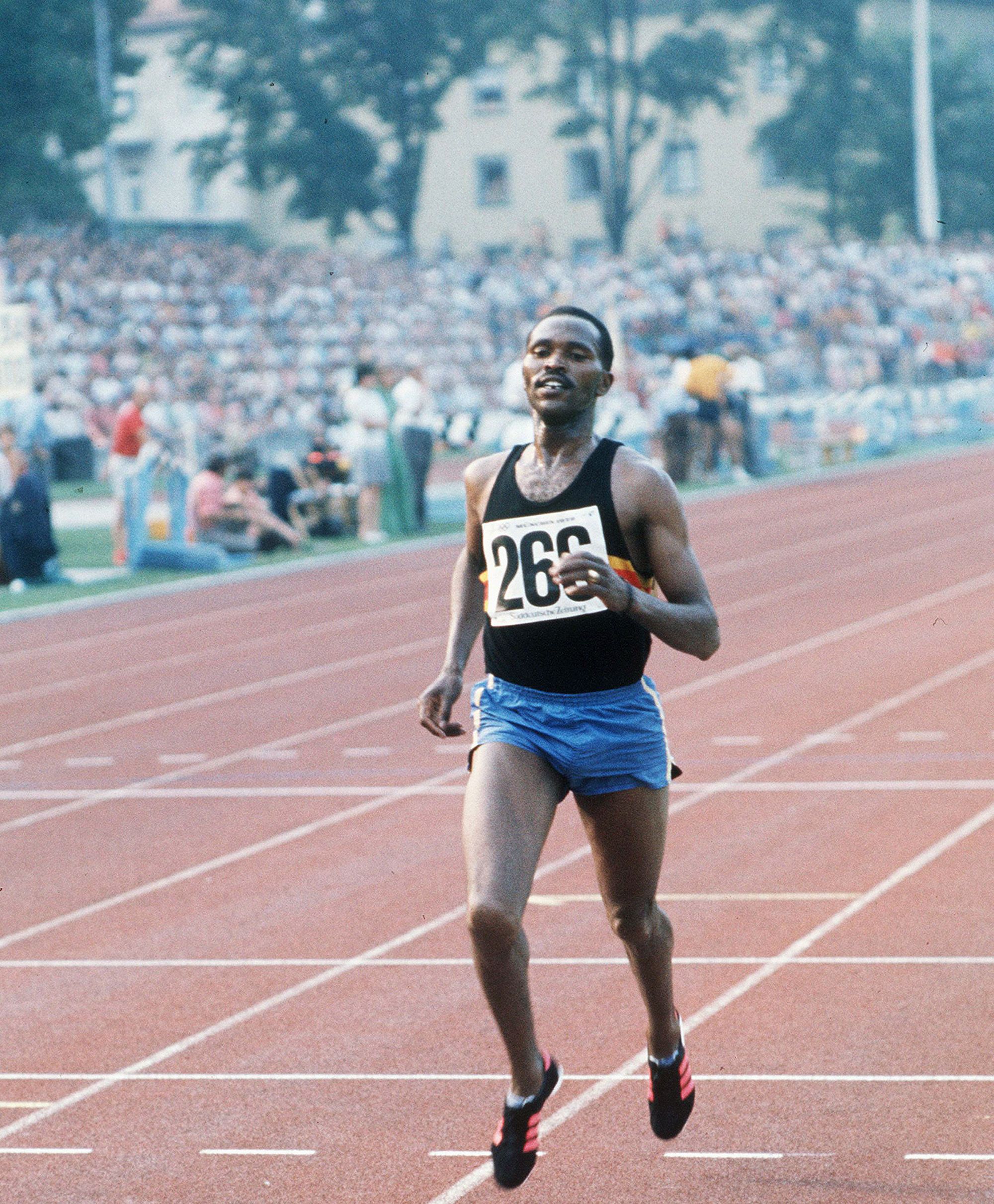 The clamour for a head-to-head was satisfied when Keino met Clarke over 5000m in Melbourne a month later. There was no world record this time but Keino, sporting the lucky orange baseball cap he bought as a souvenir from the Tokyo Olympics, was a decisive winner, prevailing by 40 metres.

Clarke reclaimed the world record decisively eight months later. The 13:16.6 he recorded in Stockholm in July 1966 stood for six years, until Lasse Viren chipped 0.2 from it as a homecoming celebration in Helsinki in September 1972, on the back of his first Olympic 5000m-10,000m double in Munich.

Traffic and illness no bar to Olympic glory

As for Keino, he proceeded to become a double Olympic champion himself – four years and two disciplines apart.

The ‘flying Kenyan policeman’ with the long, loping stride had already established himself as a formidable force and a hugely popular performer on the international circuit before his astonishing heroics at the Mexico Olympics in 1968.

The fact that he had to run the last mile to get to the stadium in time for the 1968 Olympic 1500m final, after his bus got stuck in traffic, was the least of the psychological (or, indeed, physical) obstacles he had to overcome before executing his most famous victory.

A week earlier, Keino had collapsed two laps from the end of the 10,000m final, suffering from acute stomach pains which proved to be the result of a severe gall bladder infection. He collapsed on the infield but, when the stretcher-bearers arrived, he insisted on picking himself up and finishing, even though he had been disqualified. His compatriot Neftali Temu went on to win, claiming Kenya’s first Olympic gold medal.

Four days later, despite being unable to digest solid food, Keino took the silver medal in the 5000m behind Mohamed Gammoudi of Tunisia, with Temu in third.

As the long-time trailblazing standard-bearer for Kenyan track and field, Keino felt it his duty to bring home 1500m gold. He was still suffering stomach pains on the morning of the final three days later. The West German team doctor warned he would be risking his life if he competed and told him to stay in bed and rest.

When the doctor left, however, Keino jumped out of bed, got dressed and caught the bus to the stadium. “I must run for my country,” he insisted. 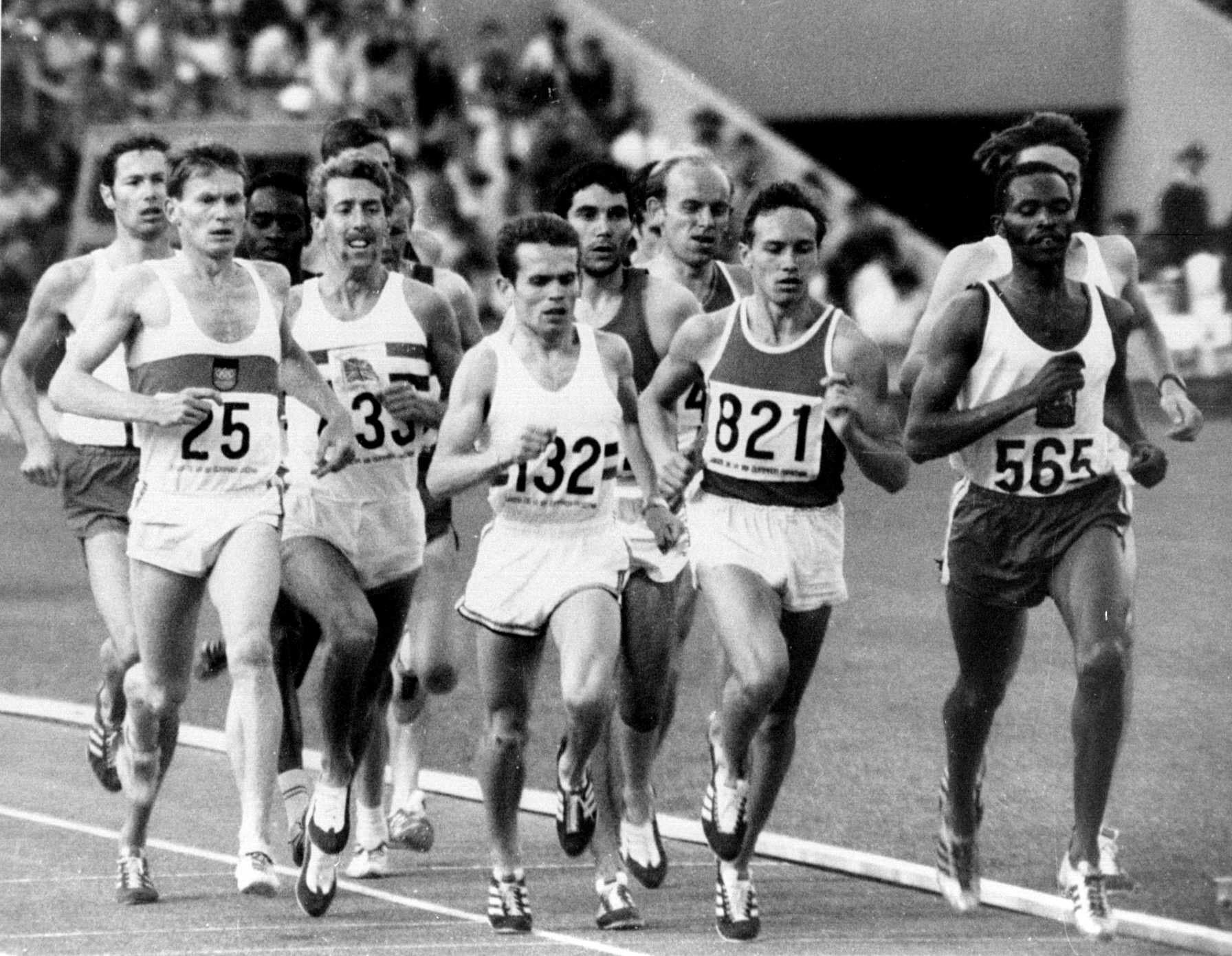 Despite his physical frailty, and the race to get to the stadium, Keino proceeded to produce one of the great middle-distance runs of all time.

Blitzing clear of the pack after his Kenyan teammate Ben Jipcho’s blistering 56-second opening lap, Keino finished 20 metres clear of Jim Ryun, the US favourite who held the world records for 800m, 1500m and the mile, and who had been unbeaten at 1500m and the mile for three years. Keino knew the only way to neutralise Ryun’s deadly finish was to amass an unassailable lead. He won in 3.34.9, an Olympic record, with Ryun a distant runner-up in 3.37.8.

Asked how he summoned such a stunning performance, Keino replied: “I was thinking to myself, ‘This is the race of my life. If I die here, I die here’.”

Such fearlessness came naturally to the son of a Nandi herdsman who escaped death at the claws of a leopard at the age of 12. The young Keino came across the wild cat preying on a goat and had to flee and hide up a tree to escape.

At the 1970 Commonwealth Games in Edinburgh, Keino defied death threats to run in the 5000m final. “A man only dies once,” he told the Kenyan officials who attempted to dissuade him from lining up. He finished third in the race, behind Scots Ian Stewart and Ian McCafferty but won the 1500m.

He was also threatened by a man with a gun while warming up for the 1500m at the Martin Luther King Memorial Freedom Games at Villanova University, Philadelphia, in 1970. “What are you doing here, monkey?” the assailant asked. “I told him I was a human being in my country,” Keino recounted. “I didn’t win the race – I was second to Marty Liquori – but I did my best.”

Keino finished second to Finland’s Pekka Vasala in the 1500m final at the1972 Olympic Games in Munich but claimed his second Olympic gold as a novice 3000m steeplechaser. “I jumped the hurdles like a horse,” he said.

Hezekiah Kipchoge Keino was born in Kipsamo in the Nandi Hills in western Kenya. His parents died when he was young, and he was brought up by an aunt.

He ran four miles barefoot to school each morning, four miles back at lunchtime, and repeated the stamina-building exercise in the afternoon. After school and at weekends, he trotted around the surrounding hills for hours, herding the family’s goats at high altitude.

At 81, he lives on the 500-acre farm he bought after his retirement from track competition in 1974. At Kazi Mingi Farm, in the hills near Eldoret, he has built perhaps his greatest achievement.

Over the past 40 years, hundreds of orphans and abandoned children have been raised by Keino and his wife, Phyllis, at the Kip Keino Children’s Home there. The farm complex also houses the Kip Keino School and the Kip Keino High Performance Training Centre.

Laura and Chamatia are typical of the adopted Keinos. They were found by police officers on the streets of Eldoret, unable to move because of pneumonia. When no one claimed them from the city hospital, Keino’s old police colleagues called Kip and Phyllis.

Others have been orphans of Aids victims. “They are all my children,” Keino said. “My own mother died when I was three. I don’t want anyone to grow up with that problem.

“I came into this world with nothing and I will leave with nothing. While I am here, I should be mindful of those people who need help.

“We can’t help everyone, but we do what is within our ability. The money that we make from farm produce and from the training centre helps to subsidise the children’s home and the school.”

The inestimable Kip Keino will turn 82 on 17 January.

BACK
Pages related to this articleAthletes
Kipchoge Keino