Statisticians A Lennart Julin and Mirko Jalava look back on the best long distance performances on the track this year, with Julin covering the men’s events and Jalava the women’s.

After Mo Farah’s impressive London 2012 Olympic Games double the question was what kind of tactical counter measures his Kenyan and Ethiopian rivals would have developed for 2013. As it turned out nothing had changed and the IAAF World Championships final played out perfectly for Farah despite being all alone again against the top trios from Kenya and Ethiopia.

Amazingly, in Moscow everyone looked more or less paralysed by the presence of the Olympic champion and no initiatives were taken to try to bring him out of his comfort zone.

The result was a fairly slow pace where a relaxed Farah could tag along before going to the front. He couldn’t have wished for a better scenario.

So it is back to the tactical drawing board for Farah’s opponents to figure out what to do. Ethiopia’s Hagos Gebrhiwet and Yenew Alamirew as well as Kenya’s Edwin Soi, Isiah Koech and Thomas Longosiwa have the necessary physical tools but they must really commit themselves to using those tools in an optimal way to succeed in unsettling Farah.

Gebrhiwet and Koech, who took the minor medals in Moscow are still teenagers, i.e. over a decade younger than Farah.

The fastest time of the year was set by Soi with 12:51.34 at the IAAF Diamond League meeting in Monaco with Bahrain’s Albert Rop, another teenager, hard on his heels in 12:51.96,

There was another fast race in Rome, won by Alamirew in 12:54.95, when he just held off Gebrhiwet.

The 10,000m on the track has almost vanished outside of the major championships. Only the corporate circuit in Japan features the event regularly so the 2013 story of this event effectively consisted of just four races: the IAAF World Championships and the three races used by Kenya and Ethiopia for qualifying purposes.

The race the day before the IAAF Diamond League in Eugene was the official Kenyan trial in 2012 and this year it was looked upon as the unofficial Ethiopian trial, with resurging world record holder Kenenisa Bekele winning in 27:12 closely followed by Imane Merga and Abera Kuma, and then Kenya’s Bidan Karoki.

However, there were other Ethiopians with Moscow ambitions and four weeks later another race was set up in the Swedish town of Sollentuna.

On a windless Scandinavian evening perfectly suited for fast times the top three didn’t just surpass Bekele’s mark in Eugene, and secured their Moscow-tickets, but also dipped under 27 minutes: with Dejen Gebremeskel clocking 26:51.02, Kuma 26:52.85 and Merga 26:57.33.

Kenya’s team was selected at home in Nairobi: 21 runners started but just 10 finished and the three Moscow tickets went to Karoki, Paul Tanui (like Karoki, based in Japan) and Kenneth Kipkemoi.

However, the tough selection procedures the Ethiopian and Kenya runners had to endure possible took their toll.

In Moscow, like in Daegu 2011, the fight for the gold came down to a dual between mo Farah and Ethiopia’s 2011 World champion Ibrahim Jeylan, neither of whom had needed to fight for selection.

Farah prevailed by 0.52 to get revenge for Daegu two years previously where Jeylan triumphed by 0.26.

For decades, this event has been Kenyan property and their grip has shown no sign of weakening. In the 2013 world list, runners from Kenya occupy no less than eight of the top 10 positions.

The situation also appears to most likely remain for the foreseeable future as four of those runners are still 21 or younger.

Even though their ‘old guard’ is represented by the championship specialist  Ezekiel Kemboi, who once more prevailed at the IAAF World Championships, the ‘new guard’ seems ready to carry on the winning tradition.

The young Kipruto actually had the best season overall with five straight wins - three in IAAF Diamond League, one in IAAF World Challenge and one in Kenyan trials - coming into Moscow.

Not far behind were fellow youngsters Hillary Yego (seven sub-8:10 times and a win in the IAAF Diamond League final), Gilbert Kirui and Jairus Birech.

Despite the Kenyan dominance of the event it is still now six years since they got their last medal sweep in Osaka 2007.

The Frenchman is thus still waiting for his first gold, as well as for becoming the first man not born in Africa to run under eight minutes. This year he went close though at the IAAF Diamond League in Paris, setting a European record of 8:00.09 when finishing second behind Kemboi’s  2013-leading 7:59.03.

With Vivian Cheruiyot, Kenya’s World champion from Daegu 2011, out of the picture in 2013 because of a pregnancy, it was all about Ethiopia in this event this year.

The three fastest times of the season, by a long way as the only women under 14:30, were all run by Ethiopians and Tirunesh Dibaba, who has now won three Olympic gold medals and a total of nine World titles, was the fastest with 14:23.68, running her world leading time at the IAAF Diamond League meeting in Paris in July.

However, Dibaba opted to run only the 10,000m race in Moscow and her 22-year-old compatriot Almaz Ayana, who had finished second in Paris in a personal best of 14:25.84, had the fastest time ahead of the World Championships.

Nevertheless, Ayana would have to deal with her compatriot Meseret Defar, who has won two Olympic gold medals at this distance and the 2007 5000m World title. Defar had also run a very fast 14:26.90 when winning at the IAAF Diamond League meeting in Oslo in June.

In the end, the sprint finish in Moscow after a slow race also featured Kenya’s Mercy Cherono in addition to Defar and Ayana.

Cherono, 22, had finished in fifth place in Daegu 2011, but could not answer Defar’s change of pace and experience as she regained her World title after a six year hiatus.

The Kenyan won the silver with Ayana following close behind for the bronze.

Meseret Defar recorded the fastest time of the year with 30:08.06 in Sollentuna, Sweden, in June but opted to run only the 5000m race in Moscow, leaving the way clear for her compatriot Dibaba.

The 28-year-old had run the second fastest time of 2013 to win in Ostrava, clocking 30:26.67 and just like Defar in the 5000m, had very little trouble utilizing her renowned change of pace in Moscow to sprint to victory in 30:43.35 for her third World title over 25 laps of the track.

Kenya’s Gladys Cherono, 30, was competing at the World Championships for the first time but  came agonizingly close to the gold medals, recording 30:45.17 for second place with Ethiopia’s Belaynesh Oljira grabbing the bronze.

Nine women ran under 31 minutes this year, with five from Ethiopia, three from Kenya and Japan’s Hitomi Niiya completing the list with a personal best of 30:56.70 when finishing fifth in Moscow.

Ethiopia are in charge of the distance running at the moment on the women’s side but Kenya were able to stand their ground in their specialist event, the steeplechase, during 2013.

Having not won a medal at the London 2012 Olympic Games, with Milcah Chemos being their best when finishing in fourth place, the Kenyans stepped up a gear in 2013.

Chemos, 27 and a bronze medal winner at both the previous World Championships, stepped up to the top of the podium in Moscow and clocked a world-leading 9:11.65 for the gold medal while Chepkurui took the silver in a 9:12.55 personal best.

The year though belongs to Chemos. The policewoman, who holds African record at 9:07.14 from 2012, enjoyed a near perfect season and she won seven out of her nine starts including four wins at IAAF Diamond League meetings which secured her the Diamond Race. 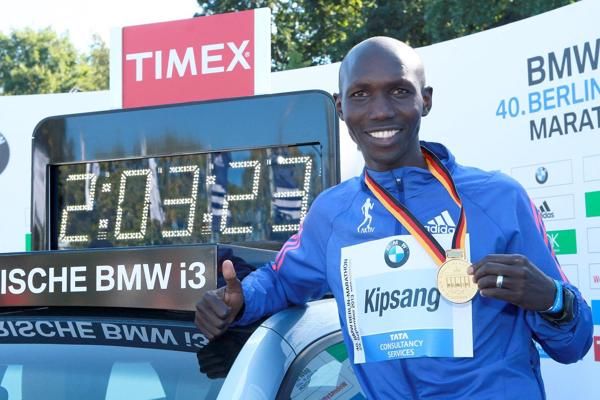 Statisticians A Lennart Julin and Mirko Jalava look back on the best road running performances of the year with Julin covering the men’s events and Jalava the women’s.