Lithuanian athletics tracing its heritage back a century

Competition this weekend in the Baltic seaside town of Palanga marks 100 years since the first Lithuanian athletics championships took place.

Although it is neither an anniversary of athletics gaining a footprint in the country or the formal founding of the national federation, nevertheless it is an important landmark in Lithuania’s athletics history.

Lithuania was very much a late starter in terms of organised athletics compared to the European countries to its south and Scandinavia.

According to the Lithuanian national encyclopaedia, describing the history of athletics in the country in the early part of the 20th century: “Lithuania was an agrarian country. Lithuanian physical culture and sports lagged far behind neighbouring and other countries. She inherited a very primitive understanding of physical culture from Tsarist Russia. For many, especially the older generation, it seemed that sport was just a pastime for those with no work.”

Nevertheless, in the years immediately following the end of World War I and the declaration of Lithuanian independence in February 1918, and despite no less than three separate wars of independence in almost as many years, sports clubs started being formed in and around the then capital Kaunas.

On 13 July 1919, Lithuania’s first recorded athletics meeting took place in the city’s famous Vytautas Park, with a variety of disciplines being staged and one of the main organisers Steponas Garbaciauskas winning the 60m on the grass track in 9.0.

Just over a year later, on 19 September 1920, with Garbaciauskas as one of the main instigators, the broadly-based Lithuanian Physical Education Union was founded and among its remit was the organisation of athletics activities.

Garbaciauskas was a multi-talented man who visited the inaugural 1924 Winter Olympic Games as a journalist and was the captain of the national football team when Lithuania made its summer Olympic debut in 1924.

It was only logical to Garbaciauskas and his colleagues that a national athletics championships were organised and the first was held the following summer, with Vytautas Park again the venue for the 11 men’s events (women’s events were staged from 1922) to be contested.

Garbaciauskas himself was not only one of the main organisers but took the 60m and 200m titles in national records of 7.6 and 25.2, two of a plethora of marks he was to set in the next four years, not only in the sprints but also in the high jump.

From these early modest beginnings, Lithuanian athletics horizons started to expand in the mid-1920s.

The Lithuanian Physical Education Union intended to send several athletes to the 1924 Paris Olympic Games but in the end only the football team and a pair of cyclists were sent but five athletes were sent to Amsterdam four years later, including 800m runner Paulina Radziulyte who was the country’s first ever female Olympian and who later found even greater fame as a basketball player.

Lithuania did not participate in the 1932 and 1936 Olympic Games owing to financial and political circumstances but did send athletes to the first European Athletics Championships in Torino, Italy in 1934.

However, success as far as winning medals was concerned eluded Lithuanian athletes until after it had been incorporated into the Soviet Union following the Red Army occupation during World War II. 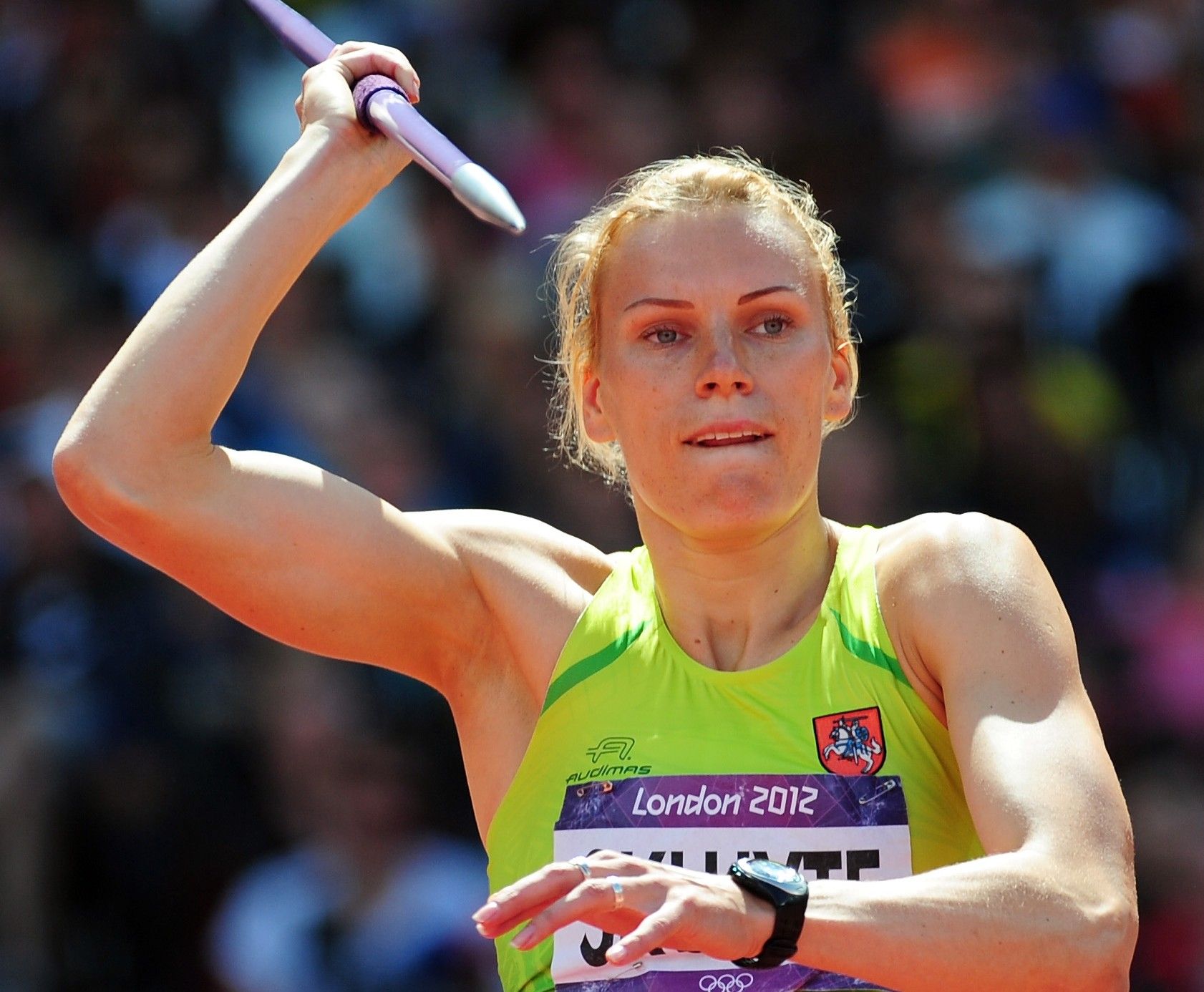 In the wake of the USSR’s return to the international sporting arena in the 1950s, Lithuanian sportsmen and women competed regularly in the famous red vest of the former USSR although, like the majority of athletes from the constituent republics, their representatives were usually numerically overshadowed by their Russian and Ukrainian counterparts.

The first Lithuanian athlete to stand on the Olympic podium was the walker Antanas Mikenas, who took the silver medal in the Melbourne 1956 Olympic Games 20km race walk, part of a Soviet Union clean sweep of the medals in that event.

In 1958, javelin thrower Birute Zalagaityte became the first world record-holder from Lithuania when she threw 57.49m at the USSR Team Championships in Tbilisi, Georgia. To commemorate the 50th anniversary of the feat in 2008, the Lithuanian post office issued a special commemorative stamp.

By the Rome 1960 Olympic Games, Zalagaityte‘s Russian rival and USSR teammate Elvira Ozolina had become the world’s dominant thrower but Zalagaityte was still throwing well enough to take the bronze and become the first Lithuanian woman in any sport to win an Olympic medal.

The first Lithuanian to get an Olympic gold medal was Remigius Valiulis, who ran the first leg for the USSR’s victorious 4x400m quartet at the Moscow 1980 Olympics.

However, no Lithuanian won an individual Olympic or World Athletics Championships event until independence was restored in 1990.

Finally, Romas Ubartas* achieved that honour at the Barcelona 1992 Olympic Games. Having been the discus silver medallist four years earlier in Seoul, as well as the 1986 European champion, he won by a mere 18cm from the Germany’s 1988 gold medallist and world record holder Jurgen Schult.

Discus throwing in Lithuania – one of the events contested at the first national championships – almost akin to javelin throwing in Finland, and certainly there is a predilection for it.

Virgilijus Alekna won back-to-back Olympic titles in 2000 and 2004 as well as World Athletics Championships gold medals in 2003 and 2005, and after the latter triumph he was elected as the European Athlete of the Year.

In 2006, Alekna won the European title to complete his set of medals on the continental stage after bronze in 1998 and silver in 2002, and in 2017 his iconic status was confirmed further when he was presented with a Special Lifetime Award from European Athletics. 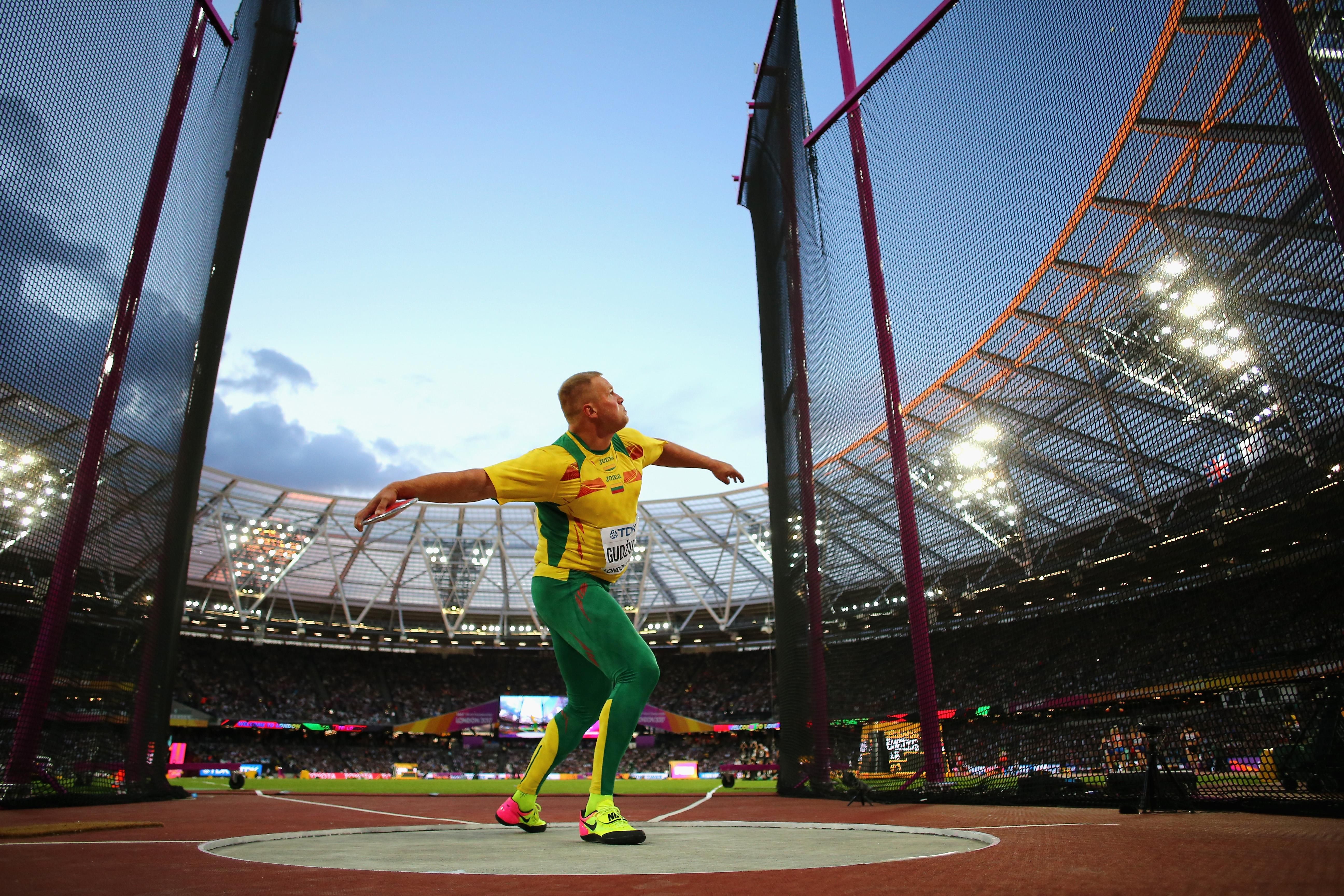 Gudzius looking for another good day

Although heptathlete Austra Skujyte should not be overlooked in the pantheon of Lithuanian athletics stars following her Olympic silver in Athens and bronze in London, after a 12-year hiatus since Alekna’s last world championships triumph it was another discus thrower Andrius Gudzius who climbed to the top of the podium in front of a global audience when he won at London 2017. He followed it up with a win the following year at the European Athletics Championships.

Lithuania failed to get a single medal at the last World Championships in Doha. Gudzius finished a disappointing 12th in the defence of his title with only one valid throw in the final but he has made a fine start to 2021.

Seven of his eight competitions since the start of his season have been over 66 metres, including an effort of 68.62m last month which briefly topped the world lists and he certainly will go to Tokyo with medal ambitions.

In addition, Lithuania will be sending some fine trio of race walkers to Tokyo with Marius Ziukas, Artur Mastianica and Brigita Virbalyte, and all three will be able to draw on the experience of having competed at Rio 2016.

This weekend’s historic national championships is a steppingstone for Lithuanian athletes en route to Tokyo in just over a month’s time but also provides an opportunity to muse on how far the sport had come in the last 100 years.

* Romas Ubartas was disqualified after his fourth-place finish at the 1993 World Championships, serving a four-year suspension for a doping rule violation.

BACK
Pages related to this articleAthletes
Virgilijus Alekna

Tulu and Meyer: the victory lap that united A...