The 32-year-old Swede got the better of Spain's Diego García, 38:42 and 38:49 their respective performances, while Qieyang won by 30 seconds over Peru's Kimberly García.

The men’s race kicked off conservatively over the opening kilometre, with Czech Republic’s Michal Morvay leading the way in 3:59, closely followed by a large pack including all the favourites. World 20km bronze medallist Karlstrom soon began to accelerate and covered the second kilometre lap in a brisk 3:47 to open a slim margin over Mexico's Ever Palma, Brazil's Caio Bonfim, China's Jung Zhang, Ecuador's David Hurtado and Spain's Diego García. Surprisingly, Italy's Olympic 20km champion Massimo Stano had already lost contact with the pack by then and was ultimately not a factor.

Before the third kilometre (3:51) the chasing group caught Karlstrom and halfway was reached in 19:25 after successive 3:55 and 3:48 splits. 2017 world bronze medallist Bonfim made most of the pacing duties while Zhang began to falter shortly afterwards. Local hero García gave the home crowd something to cheer about by moving to the front for the first time to leave Palma and Zhang behind after a 3:51 split in the seventh lap.

The podium became clear when Hurtado received his third warning and was forced to visit the pit lane for one minute. Following a steady penultimate lap in 3:58, Karlstrom found another gear to cover that kilometre in 3:47 which proved too fast for García and Bonfim.

Karlstrom romped home in 38:42 (19:25/19:17 his two halves) with García seven second in arrears and Bonfim a distant third in 39:13. The three of them managed respective lifetime bests over the rarely contested distance. Stano had to settle for 13th place in 40:21.

“I already knew Madrid as I have enjoyed some training stints here some years ago,” said Karlstrom, in fluent Spanish. “I'm impressed because of the atmosphere, it's a privilege to compete in Madrid city centre, I hope today's event boosted the profile of the event.”

Karlstrom, who intends to contest the 20km and 35km at the World Athletics Championships Oregon22, will next compete in La Coruna on 28 May.

“Today's event was a dream come true and it has been even better than I could have imagined, I'm over the moon,” said European silver medallist Garcia, who was the only race walker in the top three not to receive a single warning. “In addition, I performed really well; despite being the organiser, Karlstrom didn't let me win but I'm delighted with my runner-up today.” 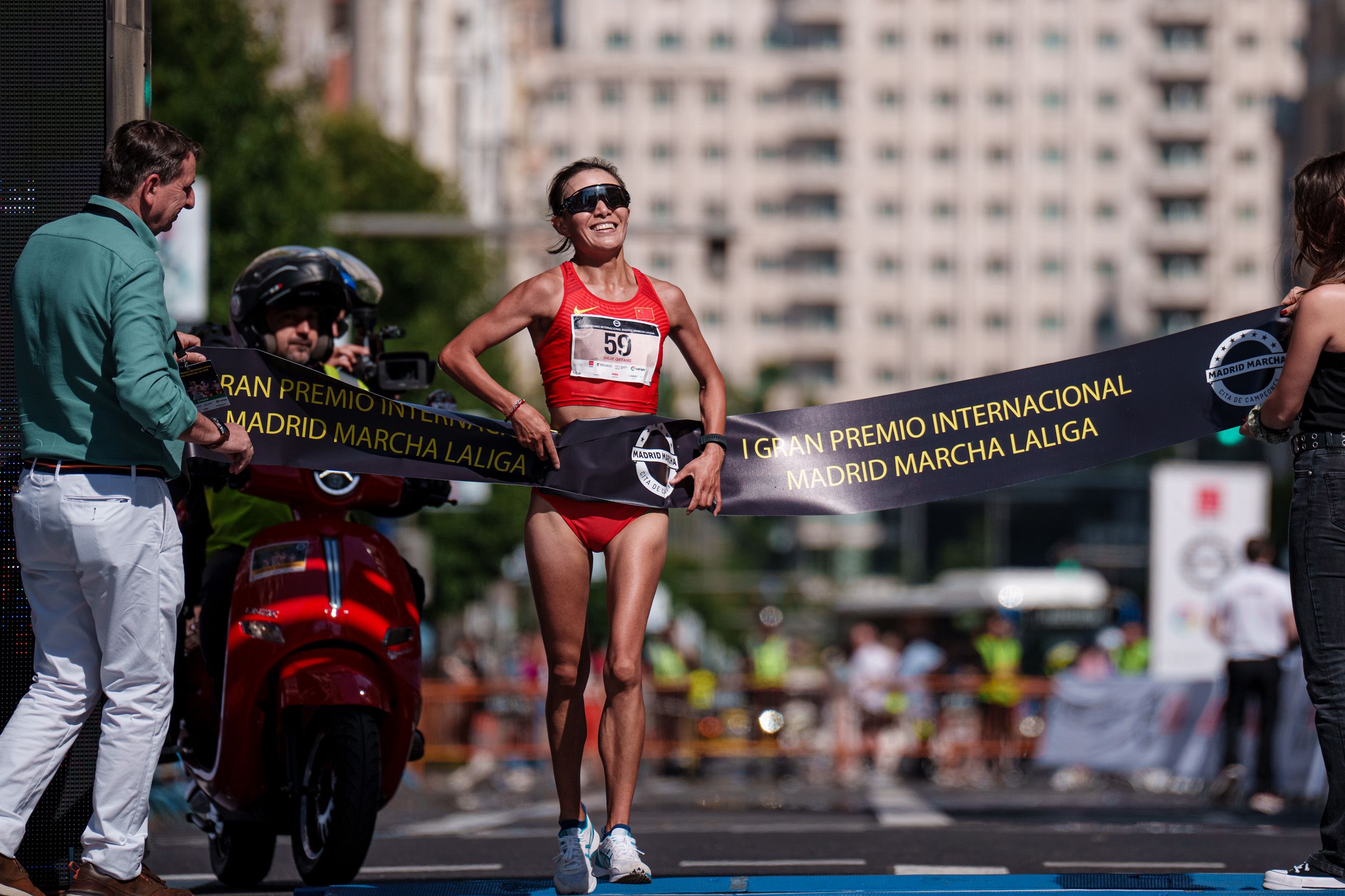 Over the following couple of laps the Peruvian increased the pace to cover them in 4:19 which whittled down the leading group to three: herself, Qieyang and García-Caro. That trio went through halfway in 21:43 and at exactly that point world silver 20km medallist Qieyang broke away from her two rivals with ease, churning out 4:14 laps. García and García-Caro walked in single file, three and six seconds adrift the leader by the sixth kilometre.

Over the seventh lap it became clear that, barring disaster, the final podium would be Qiueyang, García and García-Caro, who couldn't take any risk after receiving two warnings. The 31-year-old Chinese race walker strengthened her leadership over the closing circuits to cross the finish line unopposed in 43:07 (21:43 and 21:17 her two halves) with a 30-second lead over García while the Spaniard managed to keep her third spot in 43:50. Neither the winner nor the Peruvian received a single warning.

Both men’s and women’s podiums will clash again on 28 May at the Gran Premio Cantones in the Spanish city of La Coruna.

BACK
Pages related to this articleAthletes
Shijie QIEYANG