Fifty-eight years after the competition took place, Phil Shinnick’s leap of 8.33m – achieved during the 1963 California Relays in Modesto – has been recognised by World Athletics as a long jump world record in the event’s official progression.

Shinnick was invited to the final weekend of the US Olympic Trials by World Athletics and hosted by USATF so he could be presented with a world record plaque from two-time world champion Mike Powell, the current world record-holder.

No wind readings were taken for Shinnick’s jumps at the 1963 California Relays, where he beat 1960 Olympic long jump champion Ralph Boston by three centimetres. His winning leap of 8.33m was two centimetres farther than the existing world record at that time, Igor Ter-Ovanesyan’s 8.31m, but due to the lack of wind reading, the mark could not be ratified.

Some disciplines recorded strong tail winds, while others were wind-legal. Reporters at the competition wrote of the fluctuating winds later in the evening as the sun set, but Tom Moore, the meeting director, said that the wind was barely negligible at the time of Shinnick’s jump. Boston, the runner-up that day, added: “I saw the attempt and it was real.”

Before that competition, Shinnick was a relative unknown with a PB of 7.75m. A talented all-rounder with respectable PBs of 10.5 for 100m and 2.12m for the high jump, Shinnick went on to become a regular eight-metre long jumper and represented the USA at the 1964 Olympics in the long jump and ran in the men’s 4x100m in post-Olympic competitions.

Shinnick has spent decades campaigning to get his mark officially recognised. In 2003 USATF retroactively recognised his mark as the US record for that moment in time.

BACK
Pages related to this articleAthletes
Phil Shinnick 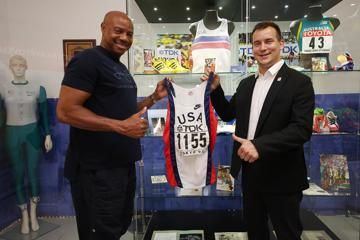