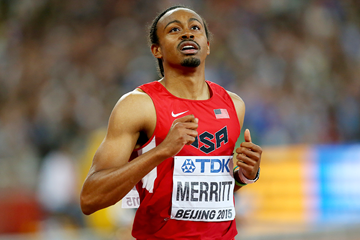 Recent experiences have made Merritt a ‘stronger athlete’

Earlier this year, Aries Merritt won his second US indoor 60m hurdles title, clocking a season’s best of 7.51 in Albuquerque. His first national victory had also come in the city in February 2012 when he timed his still-standing PB of 7.43.

In between that pair of titles, Merritt experienced both the highest of highs possible in the sport, as well as some of the lowest of lows that life itself could throw at him. Yet Merritt, now 31 and training at the Altis Center in Phoenix, Arizona, cleared every obstacle in his path and kept on running.

Two weeks after taking his initial US indoor title, Merritt sped to 7.44 – just 0.01 shy of his PB – to claim the world indoor title in Istanbul. Then outdoors, he lowered his 110m hurdles PB by 0.08 to 12.93 in winning the tough US Olympic Trials.

Merritt backed up that performance with a pair of 12.93s to win the London and Monaco Diamond League races. Then at the London 2012 Olympic Games, he clocked 12.94 in his semi before rushing to a 12.92 PB to claim the gold medal and become the first US man to win the Olympic 110m hurdles crown since Allen Johnson in 1996.

One day shy of a month after his Olympic victory, Merritt closed his 2012 season at the Diamond League final in Brussels – and the world has yet to see a faster clocking than his still-standing world record of 12.80.

Running out of steam

“It was odd,” Merritt recalled. “I felt like I just couldn’t finish my races like I used to. I just ran out of power.”

Yet in 2015, Merritt appeared to be on the way back to his old self, clocking 13.12 at the Prefontaine Classic, then 13.19 for third at the US Championships to earn a place at the IAAF World Championships Beijing 2015, where he charged to a season’s best of 13.04 to claim the bronze medal.

It was a medal-winning performance made more remarkable once Merritt revealed what had been hampering his usually-dominant style: he was suffering from advanced kidney disease. He estimated that the function level of his affected right kidney was 17% in Beijing. He also battled a viral infection.

“It was really hard for me the past couple of years, going into Beijing and telling people about the kidney disease,” he said. “It got to the point where it was too overwhelming to keep in, so I had to tell everybody.”

Four days after taking the bronze medal, Merritt underwent kidney transplant surgery. His older sister LaToya Hubbard was the donor of a healthy organ. But six weeks later, a complication from the surgery required a second procedure.

Merritt ran just twice indoors to start the 2016 Olympic season, but then didn’t move outdoors until the last day of April. He clocked 13.24 to win the IAAF World Challenge meeting in Beijing before taking fourth place at the IAAF Diamond League meeting in Eugene in 13.51.

“But I pulled my groin at Pre and didn’t race again until the Trials,” says Merritt. “I knew I would have to will my way on to the team. I had checked with my doctors at the Mayo Clinic and they didn’t want me to go to the Games if I made the team. They were most worried about the threat of the Zika virus and whether or not my immune system could cope with it if necessary.”

Merritt ran a season’s best of 13.22 to take the dreaded fourth spot at the US Trials, finishing one hundredth behind third-place finisher Jeff Porter.

“I felt that if I had made the team, I would have six more weeks to get stronger and get in more training before Rio,” he said. “I just needed a little more time. I honestly feel I could have got a medal at the Games.”

When Merritt started his 2017 campaign, he says he was much farther along than in other years. “I couldn’t get in any fall training in 2016 while recovering from the surgery,” he says. “This year I got in a lot of good training. I’m a finesse hurdler and the 110s are such a rhythm-based, finesse event. But I know for sure that I am much farther along in training than starting the 2016 season.

“To be honest, I went into the US Indoor Championships with a lot of uncertainty,” he added. “We [Merritt and coach Andreas Behm] hadn’t done a lot of speed work, which was unsettling. As I’m older now, I haven’t done as much speed.

“We had done a lot of strength work and conditioning, and we were still in the conditioning phase. I’m like, ‘Please let it be three rounds so I can run my way into shape in the rounds’.”

Merritt had opened his 2017 campaign on 4 February in Flagstaff, clocking 7.63. “I went to Birmingham and ran 7.70 and it was awful,” he said. “I worked on my start and even at the US Indoor Championships, it wasn’t the best. But I got it done somehow and I’m just glad I came out with the win.”

He may have hoped for more, but Merritt led the US Indoor Championships final virtually from the gun and kept lengthening his margin to the finish – just as he had done back in 2012 at the start of his historic season.

Merritt already has a few outdoor races under his belt. After victories in Tempe and at Mt SAC, he finished fourth against a quality field at the Drake Relays, clocking 13.44 in tough conditions.

He is already looking ahead to the rest of the outdoor season in general and most especially to this August and the IAAF World Championships London 2017. “Of course, London is the big aim,” he says. “That’s the scene of my greatest championship performance.

“First, I just want to stay healthy and then make the team. After I do that, I want to at least be a contender for a medal. Winning would be the best. But mainly I want to have no injury set-backs and I feel I will do that because I have a much stronger base than in the past few years.

“I’m really looking forward to competing this season,” he added. “I want to return to the level I ran at in 2012. I really believe I will run very well this year.”

His experiences over the past few years have given Merritt a new outlook.

“Even though life may try to limit you, if you put your mind to whatever it is you really want, you can do it,” he says. “Even if I missed going back to the Olympics, I’m a stronger athlete for all that happened.

“I want to be that person who inspires people to always stay positive and fight on. [The doctors] told me I would never run again, [but] I’m back running. They told me I would be on dialysis for the rest of my life, but I’m not.

“I had a kidney transplant, it was successful and I’m back doing what I love,” he said. “So if you just stay positive and stay focused on something you really want to achieve, you will do amazing things.”