As Moloney charts his course to Doha and Tokyo, comparisons with Mayer begin

Ashley Moloney and Kevin Mayer have one thing in common: they are both decathlon world champions.

So, what’s eight years, a world record and a senior world championships gold medal between friends? A gulf, in terms of what will ultimately be remembered, it’s true; statistically, maybe not so much.

Mayer, too, won a world junior title; in Moncton, Canada, in 2010. Today, he sits atop the men’s combined events heap, but a like-for-like comparison with Moloney suggests the young Australian is superior at the age both became U20 champions.

Both won the junior title when they were 18 years old. Both were and are regarded as prodigious talents. Examining their decathlon scores event-by-event in the year they became U20 champion, however, sees the young Australian ahead of current superstar Mayer in a majority of the decathlon events and with a clear lead on overall score.

Putting what Moloney achieved in 2018 against Mayer’s performances eight years earlier (see table below), Moloney is ahead in six events and Mayer in four (that is taking account of outdoor performances only. If Mayer’s 2.10m indoor high jump is put in, it’s 5-4 with one equal).

On decathlon event 11 - the overall score - Moloney enjoys a considerable advantage: 262 points, in fact. More impressively, while the personal bests take account of the whole year in question, both high totals were achieved in winning the U20 title.

What to make of such comparisons: everything, and nothing, all at the same time. We know that the progress from junior champion to senior gold medallist does not proceed in straight lines. Indeed, history tells us it is likely not to happen at all. Mayer has accomplished it; Moloney is about to take his first steps along the same road.

Still, there are some more figures that augur well for Moloney’s chances of succeeding. In three of the decathlon’s 10 events – the 100m and 400m, and the high jump (outdoors – where the decathlon is contested) – he is ahead of Mayer even now. If the myriad other factors in the journey all go well, that means he only need find similar relative improvement across the other seven. Tough, indeed, but not as difficult as chasing in all 10.

Moloney, who is preparing to make his senior decathlon debut at the Australian Championships at the beginning of April, is delighted – but not carried away – by the Mayer comparison.

“It’s cool to be compared with Kevin Mayer,” he said. “He’s such an incredible athlete.

“(But) I don’t know if it means that much. You don’t know what was going on in his life then.

“It’s what you do as a senior that counts. I guess it’s a sign that I’m going the right way about things.”

There are other good signs, too. The combined events are as much competition against your own personal bests as against one’s direct opponents.

Moloney looks to have the right stuff in that regard, too. He faced a potential crisis on day one in Tampere after two fouls in the long jump. His third jump, off the wrong leg, if you don’t mind, was a ‘safety’ 7.06m, some half a metre down on his best. He needed to make up those lost points in another event, and did with a 2.10m personal best in the high jump.

Like his scoring long jump, the high jump PB was achieved jumping off the wrong leg. Cedric Dubler, who trains with Moloney, was not shocked at that because he had seen it earlier in the year at the Australian Championships.

His coach, Eric Brown, was not as sanguine. “You can’t do that,” he told Moloney initially when the suggestion was made. Successful clearances at 2.04m, 2.07m, then 2.10m convinced him otherwise.

Brown has coached Moloney since just before the athlete turned 16. He was already coaching Dubler, who was a silver medallist in the decathlon at the 2014 World U20 Championships in Eugene and on his way to a top-16 finish at the Rio 2016 Olympics. Brown also coached Jason Dudley to a bronze medal at the Melbourne 2006 Commonwealth Games.

When this correspondent did a story on Dubler for the IAAF website at the 2016 Australian Championships, Brown told him: “There’s another kid in the group who is just as good.”

‘Kid’ Moloney had come to Brown the previous year as a high jumper. After coaxing him to add triple jump to his repertoire, Brown then mentioned entering the combined events at a regional championships.

“A couple of weeks before the North Queensland multis, he suggested I try it,” said Moloney. “I thought it would be hard as I’d not even run a 400m or 1500m.

“It was hard,” he continues, “but it was satisfying, too, towards the end.”

From there, progress to world champion was “pretty quick. Even I can’t explain it,” Moloney admits.

Brown also is adamant Moloney can follow Dubler in making a quick transition to the senior event.

“Eric has high goals for me. He wants me to go to Doha, then to Tokyo,” says Moloney. “I believe I can do it, and if you believe it, you can get it.”

Moloney is entered in the discus, long jump and 200m at his Queensland state titles this weekend (7-10), before the national championships the following month. He is also planning to compete in Gotzis in late May, the traditional combined events meeting which is part of the IAAF Combined Events Challenge. If that goes well, watch out Doha, watch out Tokyo.

BACK
Pages related to this articleAthletes
Ashley MOLONEY 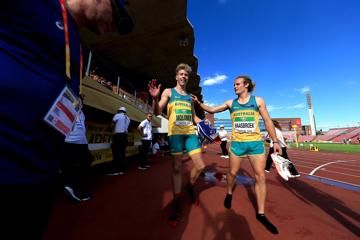