Standing atop the podium with the gold medal around his neck, Canada’s Shawn Barber still looked like a young man in disbelief at his fortune.

The evening prior, the 21-year-old had performed sublimely in the pole vault with first-time clearances at 5.50m, 5.65m, 5.80m and the winning height of 5.90m while the defending world champion Raphael Holdzeppe of Germany needed three tries at 5.90m.

Olympic champion and world record-holder Renaud Lavillenie fared even worse and cleared only his opening height of 5.80m. The Frenchman shared the bronze medal with the two Poles Pawel Wojciechowski and Piotr Lisek.

A year ago, Barber could have only dreamed of competing with these athletes. The realisation that he was the world champion – and $60,000 USD richer – was finally sinking in after hearing ‘Oh Canada’ played in the Bird’s Nest Stadium.

“I think it’s coming around and hitting me now,” he said. “You know, to have this much media exposure has been a great experience for me. I was fortunate to be very consistent throughout the meet. That was the name of the game. I came in knowing that it was going to be a meet that came down to first attempts. I couldn’t have asked for a better competition.”

Barber, who is coached jointly by his father George, a former Canadian international pole vaulter who competed at the inaugural World Championships in 1983, and Dennis Mitchell, the University of Akron coach, slept most of the day before receiving his medal. That was not surprising considering he spent an hour in doping control and didn’t sit down to dinner until after 1:00am.

“There was no celebration. It was pretty much going back and start resting up,” said Barber. “My season is not over; hopefully I will have a chance to celebrate in the next couple of nights at some point. It would be nice but I definitely have my head down to get through the rest of my season.”

Although he has another year of eligibility at Akron, he decided earlier this summer to forego that and turn professional. He signed a contract with agent Paul Doyle, who has rapidly got him a Nike shoe contract and, with fellow Doyle Management staffer Jeff Hartwig, a series of meetings across Europe.  No doubt there is a bonus written into his contract that will pay dividends for a World Championship gold medal.

Barber was born in Las Cruces, New Mexico. His father had attended the University of Texas at El Paso on an athletics scholarship and wound up teaching and coaching in New Mexico. During his coaching sessions George would often take his son along, even as a young boy, and before long he was trying the pole vault himself. Though he has dual citizenship, he chose to wear the maple leaf.

“My father was a Canadian pole vaulter a number of years ago and he is pretty much the only reason I am a pole vaulter,” Barber said of his decision. “I definitely wouldn’t be in the sport otherwise. It just made a lot of sense to me when I was growing up. It was something I talked about with him and with members of the Canadian federation. I really enjoyed their way of approaching athletics and they have shown me a lot of support and a lot of love and I am very fortunate I made that decision years ago.”

With a year remaining in his sport science course at Akron, he intends to continue studies and keep to the same schedule and lifestyle that got him where he is. That means classes, evenings watching movies on Netflix and, in the off season when the weather is good, playing beach volleyball with college friends. He admits he must sometimes hold back on the court out of concern for his well-being.

The 2015 season will continue with competitions in Zurich, Berlin, Brussels, Aachen and Warsaw. He has a laid-back approach, if not a determined goal.

“I want to give myself an opportunity at six metres but at the beginning of the season my main goal was to put myself in a good position for the World Championships in Beijing,” he said, “and I am fortunate enough to cross that off my list. The rest is icing on the cake for me. So I am going to go out and have fun at these meets and really enjoy them. That’s priority No.1 for me now.”

Now that he is the world champion, Barber is no longer just a kid with potential. As the Rio Olympics approach, surely he will be considered a medal favourite. Yet, he is philosophical about having a ‘target on his back’.

“You still look at those other vaulters doing crazy things,” he says. “I am still only third in the world rankings.

“I don’t think there’s so much of a target on my back,” he adds. “I think it’s more of their understanding that I am a competitor and I can keep up with them and can compete with them at these world-class meets.” 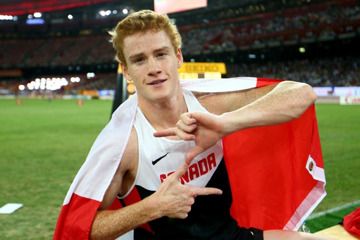