After gold in Rio, humble hero Kipchoge must be the greatest

This time, everything was perfect. This time, no one could get close to Eliud Kipchoge, much less attempt to prize the ultimate goal from his grasp.

Olympic champion – for so long he had dreamed of such an accolade that when it arrived, the 31-year-old Kenyan could barely believe his luck, or indeed contain the flood of excitement it sent washing over him.

“I have such happiness to have won a gold medal,” he said. “It’s what I came here for, and that performance makes me so proud.”

On Sunday morning (21), Kipchoge dispatched the field in the men’s marathon with an irresistible surge over the final six kilometres, having taken command of the race at the 30km mark and cranked up the pace until his rivals dropped like bowling pins.

“It was a bit slow at halfway so I decided to take over,” said Kipchoge, who crossed the line in Rio’s Sambodromo in 2:08:44, more than a minute clear of Ethiopia’s Feyisa Lilesa.

It was a performance that embodied the traits we have come to associate with Kipchoge – a fluid, facile exhibition of distance running for much of the race, then a ruthless, execution-style surge over the last five miles. As always, it was followed by a humble appraisal of his ability.

There was little doubt that Kipchoge had laid claim to be called the greatest marathon runner of all time, but he was far too humble to acknowledge such a thing. For him, that would border on arrogance, even if, deep down, we all knew it to be true.

Due to his athletic achievements, vast swathes of fame and fortune have come his way over the past decade, but this is a man who has stayed true to his roots, which are humble and basic.

Honing his talent on the school run

Coming from a farming background, Kipchoge was brought up with no aversion to hard work, often making the long cycle from his home to the town of Kapsabet as a child, lugging several gallons of his family’s milk to sell at the local market.

Like many Kenyans, he ran to school throughout his youth, covering the 3km distance twice a day and unwittingly developing the aerobic engine that would carry him to greatness many years later.

In terms of the conditions which allowed his talent to prosper, Kipchoge was dealt a strong hand, growing up near the home of Patrick Sang, one of the world’s most prolific distance running coaches, who agreed to write training plans for his protégé when Kipchoge was still in his teens.

“He saw me as his mentor, somebody he wanted to be like,” said Sang. “Later on I started coaching him from youth to junior level all the way until now.”

Their relationship extends beyond running – Sang and Kipchoge are close friends who invest in business ventures together – and the pair have a deep understanding of what makes the other tick.

“It’s about trust,” said Sang. “He has never asked me in his life: ‘why are we doing this?’ If you don’t have that trust with your athlete, they will always be difficult to coach.”

Sang would know, for the 52-year-old has been churning out champions from his base high in the Rift Valley for more than two decades now, though of all the greats who have passed through his hands, none quite rival Kipchoge for his professionalism.

That’s something echoed by Kipchoge’s manager, Valentijn Trouw, who has seen first-hand for several years not just how he applies himself to sport, but how Kipchoge acts as a mentor for young athletes in Kenya.

“His modesty, his focus, his approach to training – he is a big role model for all athletes there,” said Trouw. “Eliud is very organised, not only in athletics but also in his private life. He knows exactly what he did three years ago or last year. He is never going for short cuts, always taking the long route.”

Kipchoge is methodical when it comes to his training. It is not just completed; it is also documented in detail.

“He has a book with all his training from when he started,” said Trouw. “Every day is in the book, so when he goes to the marathon, he knows he can look back at the last four months and see that he has done everything. He knows all the work is in his body.”

Earlier this year, his months of hard toil came to fruition at the London Marathon, where Kipchoge obliterated the field to win in 2:03:05, the second fastest time in history on a record-eligible course. Moments after he crossed the line, he trained his sights on his next target, the vision that crystallised in his thoughts every time he closed his eyes: Olympic gold.

After a short break, Kipchoge returned to his training base in Kaptagat with tunnel-eyed vision, clocking up to 150 miles a week over the summer. Typical workouts included a 20-mile run at a few ticks over five minutes per mile, or an hour-long fartlek over rolling terrain that included 13 hard three-minute repetitions with one minute steady between.

Twice a week, Kipchoge worked out in the gym to strengthen his body and there were also track sessions – 15 x 1000m with a short recovery being a typical example.

On the build-up to the Olympic marathon, Kipchoge had a dream run, with neither illness nor injury costing him as much as a day’s training. “All his training was really comfortable and he was strong,” said Trouw. “He had no hiccups.”

Ever since moving to the marathon in 2013 – a distance he has now been victorious at on seven out of eight attempts – Kipchoge had earmarked Sunday 21 August as his date with destiny.

“It meant more than everything, all that came before in my career, to win Olympic gold,” he said. “I wanted to bring it home to Kenya.”

In the coming days, he will get that chance, and Kipchoge cracked a proud smile as the medal was placed around his neck by IAAF President Sebastian Coe at the closing ceremony on Sunday night.

Shortly after the race, as Kipchoge batted away the suggestion he was the greatest marathon runner of all time, he was asked whether he had it in him to break the world record, currently held by Dennis Kimetto at 2:02:57.

Getting that would truly etch him into the ranks of sporting immortality, but that’s a discussion for another day. For now, the year of 2016, we can say this much with certainty: he must be the greatest. 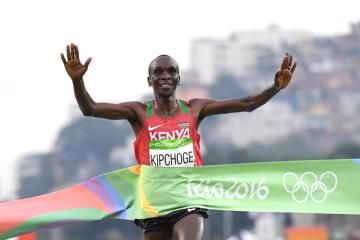