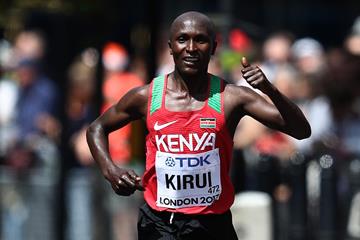 Yet it was very nearly a talent that remained undiscovered due to his initial distaste for the sport. His father, Ronald Chepkwony, had been a respectable 5000m and 10,000m runner on the domestic scene, but Kirui, his eldest of seven children, had no immediate desire to follow in his dad’s footsteps.

“When it came to school competitions I was always far away from the track,” admits Kirui, who was more interested in pursuing a life as a farmer. “The teacher would come looking for me but I had already gone to class.”

One day, however, the reluctant runner from a tiny farm – with just two cows, in the Bureti District in Kericho County – was finally persuaded to hit the track. On his running debut Kirui won the 10,000m as a class eight student at primary school – which proved the lightbulb moment that he had a talent for running.

After early reluctance, a rapid rise

He later took up a sports scholarship in Nairobi from 2007 to 2010, which eased the financial burden on his family. Yet it was only after he joined his younger brother, Gilbert, the 2011 World U18 and 2012 World U20 steeplechase silver medallist, for training a little later did he finally start to fulfil his enormous potential.

On his international debut at the 2011 African U20 Championships in Botswana he struck 10,000m gold – interestingly three places ahead of reigning World 5000m champion Muktar Edris of Ethiopia.

Then later that year at the Diamond League fixture in Brussels, Kirui marked himself out as a very special talent by running a staggering 26:55.73 to advance to second on the all-time U20 10,000m lists behind his countryman, the late, great 2008 Olympic marathon champion Sammy Wanjiru.

His performances in 2011 came as a huge surprise and the next year he landed World U20 10,000m bronze on his global championship debut.

In 2013 the good performances kept on coming when the then 20-year-old athlete finished 15th at the IAAF World Cross Country Championships in the Bydgoszcz snow.

“I had never run in such cold conditions and kept slipping on the ice,” he recalls.

Yet his career was put on hold for the best part of a year after breaking his foot in five places in a motorbike accident. Some feared he may never return to the same level but on his return to the international scene, the slightly-built Kenyan impressed by finishing second in 1:00:51 at the Lille Half-Marathon in September 2014.

Early permanent shift to the roads

He ran a full track season in 2015 but came to the conclusion his future lie on the road.

“Many times I ran on the track but the final kilometre or over the last two laps in the 10,000m, I did not find it easy,” he explains. “That is when I decided to look to road running.”

In early 2015, Kirui ran his first sub-60-minute half-marathon with a 59:55 clocking in Yangzhou before later that year chipping 17 seconds from that time in New Delhi and also pacing Eliud Kipchoge to victory for the first 30 kilometres of the Chicago Marathon.

Producing a solid outing in his first completed marathon for third in Rotterdam (2:07:23) later in 2016 he slashed almost a minute from that time placing seventh in 2:06:27 in Amsterdam.

Yet as good as those twin performances were in the Netherlands, he knew he could deliver more.

“I learned that in Amsterdam the marathon does not begin until the final 5-k,” he explains. “I felt good at 30-k, but by the time I got to 40-k my legs had stopped working.”

Based in the mountainous region of Keringet at around 2700m altitude – the same training base as world and Olympic 1500m champion Faith Kipyegon (Kirui is married to Caroline, Kipyegon’s sister) – the articulate Kirui has long taken huge ownership of his training.

Working in collaboration with Dutch coach Piet de Peuter the Kenyan draws up many of his own training plans and says: “I manage myself well. I have a good feel for running.”

His Dutch manager Valentijn Trouw supports this viewpoint. “If there is a small injury problem he will not kill himself. He will reduce the training load and work out the problem. He listens carefully to his body.”

However, in an effort to develop in the countdown to April’s Boston Marathon he hooked up for occasional “special sessions” with renowned Italian coach Renato Canova in Iten.

The training elixir proved potent. With strong foundations built on demanding 40-42 kilometre training runs on the hilly terrain in Keringet – Kirui was far from fazed by the notorious inclines of the historic Boston Marathon and revelled in the challenge.

“I thought after 10km I felt very strong and I was confident I could stay this strong until the end,” he adds. “I did not think they were too many hills.”

Victory on the streets of Boston gave the father of three boys – Godwin, 5, Godfrey, 4, and Kevin, 1 – a new-found confidence ahead of his IAAF World Championship quest, where he showed canny tactical ability and no little patience in pursuit of gold on the streets of London.

At 19 miles, it appeared victory for Kirui was slipping away after Ethiopian Tamirat Tola took a decisive lead. However, the diminutive Kenyan refused to panic. Trusting his instincts within two miles he had caught and passed Tola.

From that point on Kirui was unstoppable, cantering to victory in 2:08:27 – some 1:22 clear of Tola, the silver medallist.

“It is a great feeling to be world champion,” he said at the time. “I am very happy. It is not easy. People were saying I was going to win gold and, fortunately, I did.”

After a stellar 2017 Kirui appears to be on the cusp of becoming the next great marathoner to follow in the footsteps of the great Olympic marathon champion Kipchoge.

Yet for the modest athlete who prefers to act on feel, there is little chance of complacency or arrogance creeping into his demeanour.

“I ran 2:06 in Amsterdam last year and now I am focused on running 2:04/2:05 next year. I will keep focusing on achieving my goals, and I will put more effort than I did last year into training.”