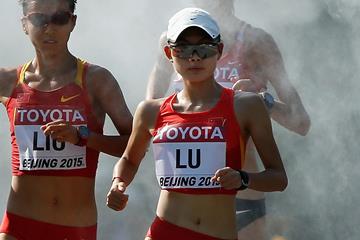 Lu Xiuzhi is walking because her brother can't

There is a cruel irony to the fact that world 20km race walk silver medallist Lu Xiuzhi is one of the fastest female race walkers in the world while her younger brother has been disabled since birth and cannot now travel anywhere without a wheelchair.

She openly admits that his disability puts the abilities she possesses as a world-class athlete into perspective.

"My brother is always a motivation for me. I need to walk longer and faster and see the world on behalf of him," said the 22-year-old Chinese race walker compassionately. "I feel sad for him. Every time I see him or think about him, my heart hurts a lot."

Born in a low-income family in the rural area of China's Anhui Province, Lu is three years older than her brother Lu Tianshu, who has a severe form of muscular dystrophy and has to stay in bed for most of the time.

Tianshu cannot sit up or turn over by himself, let alone live independently.

“If it is possible, I would give up everything, including my beloved walking career, if it meant that he could stand up and remain healthy,” Xiuzhi said.

But she knows all too well that such trade-off does not exist. What she can do is use her talents as best she can to help her family. “For me, my brother is not a burden but a motive. I want to bring some change to him and to my family.”

Lu has earned a series of honours en route to establishing herself among the top race walkers in the world. After finishing sixth in the London 2012 Olympic Games 20km race walk while still only 18, her trajectory has continued upwards.

She caused a slight surprise in domestic athletics circles when she snatched the gold medal at the National Games in 2013. She also cruised to the top of the podium at the Asian Games last year, set an Asian record (which has since been surpassed by her compatriot Liu Hong) of 1:25:12 at the World Championships Trials in Beijing before getting a silver medal in front of her friends and family in the Chinese capital.

With her prize money from Beijing, she has bought a house for her family back in her home town.

“Helping my family to afford a new house had been my goal for years, and now I have achieved it. They moved to the new house in September,” said Lu, whose father used to be a truck driver while her mother does not have a steady job.

“Although I cannot stay with my parents and brother for too much time, I can bring financial support to them. In the past, it was impossible for my brother to have laptop or smart phone but now he is delighted to be able to have such digital equipment. His happiness in turn makes me happy.

“During the World Championships in Beijing, my parents brought my brother to the Bird’s Nest Stadium to watch me competing. I was so happy to see him in the stands before hitting the finish line.”

Lu and her team-mate Liu led China to a one-two finish at the World Championships. Both of the Chinese race walkers shared the same time of 1:27:12 on the result sheet but it seemed to many observers that Lu mentally conceded the contest in the last 300 metres.

“At that time I had already received a yellow card," she said. "I thought if I forced myself to speed up, I could get more cards. I just did not want to take the risk of being disqualified and losing the silver medal. I would get the silver and the gold would belong to China; those were both acceptable results for me.

“It was not a team strategy. Liu and I train separately with different coaches for most of the time, and we do not even have many opportunities to communicate with each other.

“To be frank, I feel some regret now for not giving my best to pursue the world title. After all, it was the World Championships and I was so close to the gold medal.

“If I could have built a clear lead, or had not received the card, I would not have had to weigh the pros and cons on the final lap, so I still need to improve myself, my speed and my technique.”

Lu has now put behind the mild controversy over her decision to play the percentage game in Beijing and has already set her sights on the Rio 2016 Olympic Games next year.

“The Olympic Games in Rio will be the most important race for me next year," said Lu. "I do not want to have any regrets this time. I want to step on the top of the podium."