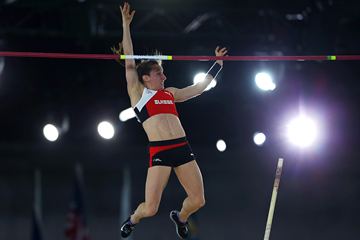 Swiss star Buchler sees no barrier on the road to Rio

Nicole Buchler is never one to give up easily. The Swiss pole vaulter needed to draw upon all of her reserves of perseverance and patience to produce her best ever form at the age of 32.

Taking up the sport some 12 years ago, the former international rhythmic gymnast has experienced a slow-burning career, one which has only really started to ignite internationally over the past 18 months.

Last year the diminutive Buchler introduced herself as a serious player in the women’s pole vault, leaping to a national record of 4.71m. This year that reputation has been garnished following no fewer than six Swiss records, a fourth-place finish at the IAAF World Indoor Championships in Portland with a lifetime best of 4.80m, and a highly consistent IAAF Diamond League campaign to sit third in the overall standings.

Riding the wave of a remarkable rise in fortunes late in her career, Buchler is a little nonplussed at her recent transformation.

“I never thought I would be competing at this level,” says Buchler, who had to skip the recent European Championships and the Swiss Championships due to a hamstring problem in order to be fit for the Rio Games.

“During the indoor season my training was not as strong as last summer, but I kept jumping higher, so I didn’t really know what was going on. Then after I jumped 4.80m at the World Indoors and followed it up with 4.78m (in Doha), I am now more confident with every meet.”

Born and raised in the town of Magglingen, a popular training venue for elite Swiss athletes, Buchler was exposed to sport from a young age. Although her father was a national-level decathlete, Buchler’s first sport was rhythmic gymnastics.

She enjoyed a distinguished career in that sport, finishing 11th for Switzerland in the team competition at the 1999 World Championships and only just missing out on qualification for the Sydney Olympics.

However, a stress fracture in her back caused her to seek an alternative sport and she had long been intrigued by the pole vault.

“I remember my dad used to coach a girl in the pole vault,” explains Buchler. “I used to watch the event and always wanted to do it.”

Boasting good coordination, coupled with a natural ability to master movement patterns thanks to her gymnastics background, she was instantly hooked and achieved a respectable 3.70m in her first season at the age of 20.

Gradually she persisted and improved in small increments. In 2007 she made her first significant breakthrough by vaulting a PB of 4.35m to snag a bronze medal at the World University Games in Bangkok.

The confidence gained from the achievement spilled over into the next year when she qualified for the Olympics in Beijing, her first senior global championships. She placed 22nd in qualification in China with a best of 4.30m and was blown away by the experience.

“It was incredible,” she recalls. “We had qualification in the morning. Normally nobody watches (in the morning) yet walking in, I was in awe to see the stands were packed.”

To broaden her pole vault knowledge, in autumn 2008 she left Switzerland to be coached in Arkansas by 1984 Olympic bronze medallist and former world record-holder Earl Bell.

She describes training alongside top-class vaulters such as Jillian Schwartz, Jeremy Scott and Derek Miles as a “real eye-opener”. Her stint in the US clearly worked as the 1.62m tall vaulter set a Swiss record of 4.50m to take the silver medal at the 2009 World University Games in Belgrade and matched that performance at the IAAF World Championships in Berlin to place 14th.

After experiencing a year in the US, she headed back to Switzerland to pursue a master's degree in sports science at the University of Magglingen and set about the next phase of her pole vaulting journey.

A stress fracture of the foot derailed her campaign in 2010 and injury was again to prove a spoiler in 2012.

She started the year with a confidence-boosting national record of 4.55m to place eighth at the IAAF World Indoor Championships, but a calf injury put the brakes on her season as she no-heighted at the European Championships. Competing with painkillers to numb the pain, she placed 25th at the London Olympics.

Yet the trigger for her more recent transformation can be traced back to 2014, the year she officially started to be coached by her US-born husband, Mitch Greeley, a 5.55m vaulter.

His measured input – although Buchler sets her own programmes – has proved decisive. Thriving under the arrangement has allowed Buchler to carry out some key technical improvements.

“My pole vault used to rotate too much and I never knew why," she said. "But we paid attention to detail and I have worked out why it happens."

Working on body and mind to scale new heights

Besides enjoying the benefits of greater technical stability, she has also become stronger mentally thanks to the work carried out with a sports psychologist. “He has helped me think more positively,” she explains. “He prepares a sentence for me to take in for certain situations and that has really helped.”

This combination of factors has proved a potent mix with the only setback of her past few seasons coming at the 2015 IAAF World Championships, where having pulled a hamstring three weeks earlier she finished tied for 17th.

But 2016 has proved the best year of her career so far. Besides the flurry of Swiss records, Buchler enjoyed an outstanding performance at the IAAF World Indoor Championships in Portland when she placed fourth, and she has gone on to become a major factor on the IAAF Diamond League circuit.

As one of the shorter vaulters on the world stage – and jumping from smaller poles than many of her rivals – she admits her technique needs to be rock solid to compete with her taller competitors. Yet she dismisses talk that her age should be any kind of barrier to future success, saying Germany's Bjorn Otto was aged 34 when he cleared 6.01m and took Olympic silver in 2012.

Next up for Buchler is the Olympic Games in Rio. So does she finally believe she belongs in the top company?

“It is hard to say,” she admits. “I’m jumping well in the Diamond League, so I should believe I can compete at the very top. I still feel like the underdog, but I can challenge the top girls.”