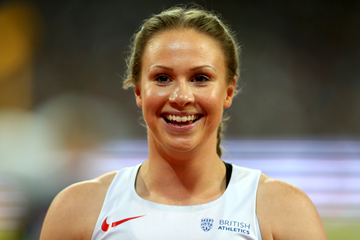 As an Olympic bronze medallist and a fourth-place finisher at the IAAF World Championships Beijing 2015, it is difficult to comprehend that as recently as the winter of 2014-15, Sophie Hitchon was stuck in a rut.

The British hammer thrower had just come off the back of a below-par campaign in which for the first season in her career she failed to post a PB. She had recorded one solitary effort beyond 70 metres and, despite taking the bronze medal at the Commonwealth Games, she ended her competitive programme on a low note, finishing a distant 19th at the 2014 European Championships.

She returned to training after her end-of-season break short on confidence and belief.

“It was really difficult to get back into training that winter,” she says. “I had quite a few doubts and I went through a difficult few months.

Thankfully, however, the 2010 world U20 champion did emerge from her winter of discontent and she insists this was chiefly down to the efforts of her coach, Tore Gustafsson, who still holds the Swedish record of 80.14m.

“He is the main reasons for my success,” she says glowingly of her coach of the past three-and-a-half years. “My coach is the one who was there to get me through those difficult periods.”

Hitchon’s journey to her winter blues can be traced back to the London 2012 Olympic Games. There, aged 21, she set a national record of 71.98m in qualification before finishing 10th in the final, but competed with a pars fracture in the back.

Recovering from the injury, she missed a significant chunk of training leading into the 2013 campaign. Despite snaring the European under-23 title and posting a national record of 72.97m at the European Team Championships, she felt far from her best and placed a lowly 19th in qualification at the IAAF World Championships in Moscow.

With doubts growing in her mind, this then led to her disappointing 2014 season, climaxing with a poor performance at the European Championships in Zurich, where an untimely stomach virus knocked her for six.

Yet Gustafsson – former coach to 2004 Olympic champion and 2011 world champion Koji Murofushi of Japan – refused to become downbeat. He gradually worked at the Briton’s technique. She made small, subtle improvements and over time her confidence grew.

“We didn’t change a lot in the programme, it was just about getting more consistency in my throwing,” said Hitchon.

“I can’t put into words Tore’s qualities. He is so positive. He looks at everything in such detail, but is always so relaxed. He always finds the right words to say. Everything always makes sense.”

With her coach based in San Jose, California, training has not always been a straight-forward process for Hitchon, who typically spends one month training with Gustafsson at fairly basic facilities at Moffett Field Air Base before returning for one month back at Loughborough in the UK.

The approach is demanding for Hitchon but over time she has become more accustomed to the travel. In 2015 her confidence began to surge after recording a season’s best of 72.23m in her final pre-World Championships competition in Szczecin.

“Each competition got better and better (in 2015) and I went into the World Championships in a really positive place,” she says.

Then in the Bird’s Nest Stadium she uncorked a pair of national records with 73.65m in round three followed by a 73.86m with her final sixth-round effort to place fourth – a mere 16 centimetres shy of bronze medallist Alexandra Tavernier of France.

Many were surprised by her performance level but not the Briton, who originally hails from the town of Burnley in north-west of England.

“I felt in good shape in training and I knew if I put my technique together it would go well. I just trusted in that,” she said. “I was on cloud nine.”

Buoyed by a new level of confidence, she performed consistently throughout the 2016 campaign, regularly breaching 70 metres and placing fourth at the European Championships. Come Rio she was ready to deliver.

“I always put huge expectations on myself and I really wanted to go out and perform,” she says. I knew if I did that, I would be in with a shout of winning a medal.”

In a historic final, Polish great Anita Wlodarcyzk successfully defended her title courtesy of a world record mark of 82.29m while Hitchon snatched bronze with a national record of 74.54m to claim Britain’s first Olympic hammer medal since Malcolm Nokes picked up bronze at the 1924 Paris Olympics.

On a blisteringly hot morning, Hitchon’s decisive effort came in round six.

“I knew I had the performance in me, but up until that point I was frustrated because I had been slightly off,” adds Hitchon, who had moved into provisional bronze with her 72.29m throw in the second round but had slipped to fifth ahead of her final throw. “I knew straight away it was a long throw, but I didn’t want to celebrate too early. I was just waiting for the mark to pop up on the board.”

Once the distance was confirmed – and with it the bronze medal – the usually reserved thrower leapt to the top of the photographers’ moat in ecstasy.

“I looked at Tore and could not believe it,” she says. “You plan for this moment all year and when it happens it is a huge surprise,” she says.” I’ve had the celebrations played back to me and it is funny because I’m not really like that (in term of personality). It shows just how much it meant to me.”

In the wake of Olympic success, Hitchon’s world turned on its head. She was invited on to TV quiz shows and attended celebrity award ceremonies and movie premieres, but after enjoying a dizzying month or so, her life has once again settled down into a normal training pattern.

With the IAAF World Championships London 2017 staged in her homeland in London, Hitchon has plenty of incentive to do well, although to climb two rungs up the podium and dislodge world and Olympic champion Anita Wlodarczyk is among one the most formidable assignments in global athletics.

So what marks out the Pole as so good?

“She has been throwing the hammer for a long time and has the benefit of throwing a lot longer compared to many of her opponents,” says Hitchon. “Her technique is great and the way she puts her power into the hammer is amazing. Hopefully the rest of us will catch up over the next few years.”

The task may be formidable but it is not mission impossible.

“People sometimes have bad years for no apparent reason, so I’ll just keep plugging away, working hard and see where things go,” she says.

As for London, Hitchon has vowed to adopt exactly the same attitude which has served her so well throughout her career.

“If I can perform to the best of my abilities, then that is all I can do,” she says. “I can’t control what others can do, so providing I perform to my best and that puts me second, third or sixth, I will be happy.”

Recent history has shown she does not disappoint on the big stage.