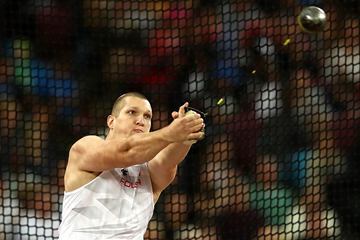 The pair have different coaches but often appear at promotional events together and after Fajdek’s victories at the 2015 and 2017 IAAF World Championships, they were both boisterously celebrating. But being overshadowed by his friend doesn’t seem to bother the 28-year-old from Bialystok, at least or the moment.

“For me, Pawel will always be the best,” Nowicki has commented generously on several occasions in the past season or so in response to the almost inevitable questions about whether he resents having to always apparently be seen to tag along behind Fajdek.

“My main preoccupation is actually getting to second best, right behind him. Then I’ll be satisfied.

“I feel as though I’ve now stabilised at this level after finishing third four times in the past three seasons (at the past two World Championships, the Rio 2016 Olympic Games and last year’s European Championships). Now the challenge is to get a silver medal.

“That’s why although the medal (in London this summer) is great, I was really expecting something more from myself.

“I had been throwing so well all season and on the day it did not work the way I exactly wanted it to,” he added, reflecting slightly stoically on his performance in London. “Maybe I wanted it (the silver medal) too much and it (the hammer) was just not flying.”

When talking about this summer’s World Championships, Nowicki’s voice had a slightly bittersweet ting, perhaps remembering the reversal in circumstances to how he earned a medal of a similar hue in Beijing two years previously.

He arrived in the Chinese capital in just seventh place on the 2015 annual list but moved up from fifth to third place in the final with his last throw.

In London, Nowicki was the only man apart from Fajdek to have thrown beyond 80 metres this year but was edged out of the silver medal slot by 13 centimetres in the sixth and final round by Valeriy Pronkin.

"The circle was very slow, wet and was not working for me,” he said. “It was really different compared to the qualification rounds. But all the results were not very big and the conditions were the same for all of us.

“Nevertheless, this season has been a special one, with the highlights being going over 80 metres for the first time and the World Championships bronze medal.”

In addition to these two high points, Nowicki can also look back at one other competition in 2017 that will be particularly treasured long after his competitive career has come to an end.

As luck would have it, this year’s Polish Championships were staged in his home city of Bialystok and, in front of family and friends, he sent his hammer out to a personal best of 80.47m, having gone beyond 80 metres for the first time the previous month at the IAAF World Challenge meeting in Ostrava when he threw 80.31m.

It earned Nowicki his first national title – after finishing third in 2011 and 2012 and then second the following four years – and inflicted a rare defeat on Fajdek.

In 64 previous encounters with Fajdek with the senior implement stretching back to 2009, it had been the bespectacled three-time world champion who has come out on top on 62 occasions. Neither of those two previous ‘wins’ for Nowicki had been actual victories: Nowicki finishing second at the 2014 Polish Championships when Fajdek finished third as 2000 Olympic champion Szymon Ziokowski took the last of his 14 national titles, and then in Rio where Nowicki got the bronze medal after Fajdek infamously failed to make the final.

Normal service was resumed after the national championships and that was to be his only win of the year – and, by coincidence, his only victory in 2016 came at a competition in Bialystok as well – but Nowicki cannot be accused of anything apart from being consistent in 2017.

Apart from his national title and bronze in London, his other eight competitions this summer all concluded with him finishing second. He also finished second in this year’s season-long IAAF Hammer Throw Challenge to further bolster his bank balance.

The question now is: can Nowicki climb up the podium at next year’s big event on the calendar for hammer throwers, the European Championships in Berlin?

Taking the qualifiers into consideration, 18 of the top 19 finishers from the World Championships were European, so the vast majority of the world’s top throwers will be reunited to contest the continental crown.

The German capital, where the enthusiastic fans always appreciate good throwing, would be the ideal stage for Nowicki to take his top-level consistency up a notch.