Cuba has developed such a strong culture of triple jumping that the hop, skip and jump has almost become synonymous with the blue and white stripes of the Caribbean nation’s flag.

For all their success in the discipline, however, the long list of world-class jumpers they have produced has been unable to eclipse British athlete Jonathan Edwards’s world record.

It seems inevitable that they will eventually claim the mark, when they find a priceless jewel hidden among their many gems. Enter Jordan Diaz.

The young phenomenon, born in Havana, achieved such a magnificent feat at the IAAF World U18 Championships Nairobi 2017 that he stunned the entire global athletics fraternity, including himself.

Entering the competition with a personal best of 16.66m, he made a spectacular statement in the final with a third-round leap of 17.00m.

That distance was all he had really targeted heading into the event, along with the gold medal, but he didn’t stop there.

With his next attempt he catapulted himself across the pit, sailing out to 17.30m and breaking the three-year-old world U18 best of 17.24m held by compatriot Lazaro Martinez.

The vibrant crowd at Kasarani Stadium erupted in shock and awe, and he was given the same sort of standing ovation which had been reserved for the top Kenyan athletes competing on home soil.

His winning margin offers an indication of just how good a jump it was, landing 1.38m farther than his nearest opponent, and he climbed to seventh place on the 2017 senior world list.

While his coach, Ricardo Ponce, had believed in his potential to crack the 17-metre mark, Diaz admits he wasn’t sure if he could achieve the feat.

“Ricardo kept telling me you can reach 17 metres, and I kept saying ‘no way, 17 metres is too far’,” Diaz says.

“Then once in Havana I got close (with his previous personal best) and I thought ‘well, I think I’m capable of doing it now’.”

After being scouted by the International School of Physical Education and Sport in Havana when he was just 12 years old, Diaz initially dabbled in various disciplines, winning the national high jump and long jump titles in his age group in his first year at the institution.

It wasn’t until last year that he channelled his focus into the triple jump event.

Training with two-time world silver medallist Pedro Pablo Pichardo – one of only five men to have jumped beyond 18 metres – the youngster has progressed in leaps and bounds in both literal and figurative terms, and his achievement in Nairobi has made all his hard work worthwhile. It has also given him the confidence that he can go a lot farther than he has already done.

“My aim was to break my countryman’s world youth best, and now that I’ve reached 17 metres I feel super happy,” he says.

“I never really thought I could do that and it proves nothing is impossible.”

Diaz’s first love outside athletics is hardly a surprise, considering his age, and his interest in music is evident by the headphones wrapped around his immaculate hairdo. He says the reggaeton genre is usually playing through the speakers.

But his real interest lies in the sport at which he excels, and his role model is double Olympic champion Christian Taylor of the United States.

His sudden rise to fame was evident in Taylor’s reaction to his performance in Nairobi.

“How cool is this? Congrats Jordan Diaz! I will never forget this name,” Taylor posted on social media, sharing the video of his world best leap.

Diaz admits that show of confidence was almost as pleasing as his incredible new global mark.

“When I saw it I was with my teammates and I got a little cocky because I was very happy that Christian Taylor mentioned me,” he says.

While Taylor and Pichardo are likely to retain their places at the pinnacle of the discipline for some time, Diaz looks set to carry the next generation.

Studying physical education, the youngster hopes to be a successful coach when he eventually retires from the sport.

For now, the athletics family around the world will be eager to see just how far he can stretch his long legs, though Diaz is keeping himself grounded and doesn’t want to think too far ahead.

“Nobody can tell the future, so we’ll see, but my main objective right now is to be at the World U20 Championships (in Tampere) next year, and who knows what I can jump there.”

The sky seems to be the limit, and he could ultimately take the men’s triple jump to another level.

At this very moment, amid all the hype around the lanky prodigy, it’s easy to forget that he is still just a kid, and he really just wants what all teenagers want: to have fun.

“I contacted all my friends and family after the final and they congratulated me,” he says, his serious expression transforming into a mischievous grin.

“They told me they can’t wait for me to get back so we can have a huge party.”

BACK
Pages related to this articleAthletes
Jordan Alejandro DIAZ FORTUN 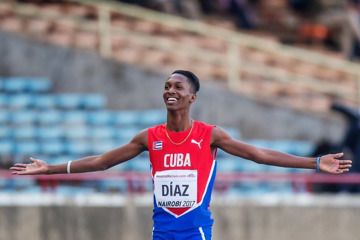