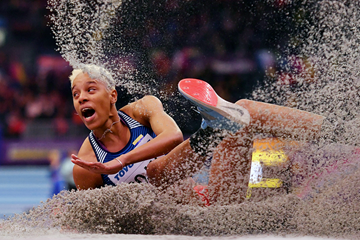 When Yulimar Rojas set a South American indoor triple jump record of 14.92m in Madrid earlier this month, it was a bittersweet moment for the 23-year-old Venezuelan.

On the one hand, it put her career back on track in what was only her second competition after an 11-month hiatus. Soon after successfully defending her world indoor title in Birmingham last year – her third consecutive global title – Rojas was side-lined with injuries to both ankles.

“2018 was a very difficult year for me, but I learned to be patient,” said the Olympic silver medallist. “It helped me become stronger mentally, to stay focused, to believe in myself and keep faith in my abilities.”

After a long wait, she returned to action on 2 February in Karlsruhe, where she finished second with 14.45m behind her training partner Ana Peleteiro of Spain. Six days later in Madrid, she produced her record-breaking leap of 14.92m, the longest indoor jump in the world since 2010, moving Rojas to 12th on the world indoor all-time list.

But as pleased as she was to jump so far, the competition left Rojas wanting more.

“I could not believe it when I saw 14.92m on the board,” she said. “I did not think the jump would be that long. I was surprised by the result as I gave away a few centimetres before the board. I then knew it was going to be a great day.

“It’s a pity the three jumps that followed were all fouls, beyond 15 metres,” she added. “If left me feeling a bit dissatisfied.”

Having worked hard to regain her best form, she knows bigger jumps will soon come.

“I came short of 15 metres, but I am sure it will happen sooner than later,” she says. “We will celebrate then.”

"I am happy with the win and the fact that I won the World Indoor Tour,” she said. “I am encouraged by my indoor personal best and South American record. I couldn't reach 15 metres now, but I have them in my legs. I now look forward to the outdoor season.”

Rojas has found a second home in Guadalajara, on the outskirts of Madrid. Coached there by Cuba’s nine-time world and 2000 Olympic long jump champion Ivan Pedroso, Rojas’s promising career has flourished there, both in training and in competition.

It was in the Spanish capital where Rojas first broke the 15-metre barrier in 2016. Her three most recent indoor PBs have also been set there.

“Madrid has welcomed me with open arms and I am so happy with their support,” she says.

Much of Rojas’s training has been focused on general conditioning and technique, but Pedroso has also helped to improve her mental strength.

“On the psychological aspect, I have received a lot of support from my coach to ensure I stay positive on the present and our goals for the season,” says Rojas. “Our focus is to recover well from each training session and strengthen my body with the help of my physiotherapist in order to stay injury-free.”

With a long season stretching to the IAAF World Athletics Championships Doha 2019 in late September and early October, Rojas still decided to test her form early on this year.

“Competing indoors this year was important to me because I could not compete last summer,” she says. “I spent 11 months without jumping the way I wanted, so I really wanted to test myself to see how my body would react and to regain confidence leading up to the outdoor season.”

Following a confidence-boosting indoor campaign, Rojas is now looking forward to an outdoor season that will include a highly anticipated rematch with two-time world and 2016 Olympic champion Caterine Ibarguen.

Ibarguen, the 2018 IAAF Athlete of the Year, dominated the triple jump from 2013 onwards but was dethroned by Rojas at the IAAF World Championships London 2017.

There is a long road leading up to their World Championships rematch in Doha, but the duo is expected to clash on the IAAF Diamond League circuit and at the Pan American Games in Lima in August.

“My indoor performances bode well for what is to come outdoors,” she adds. “Lima is important, but the ultimate goal is to defend my title successfully in Doha. I have a lot of confidence things will turn out my way.

“I’m keeping my faith that this is going to be a positive year.”