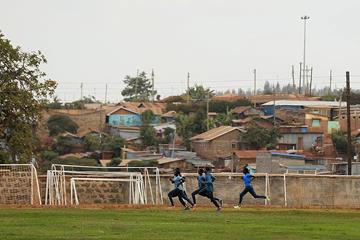 The world celebrates the United Nations International Day of Peace today, whose focus this year is to engage and mobilise people throughout the world to show support for refugees and migrants. It's a fitting time to look back at the achievements of the Athlete Refugee Team (ART), which this year became a regular feature in international competitions.

"That is why this year’s theme for the International Day of Peace is: “Together for Peace: Respect, Safety and Dignity for All”, focusing in particular on the plight of refugees and migrants throughout the world. Our obligation as an international community is to ensure that everyone forced to flee their homes receives the protection to which they are entitled under international law. Our duty as a human family is to replace fear with kindness."

Early support from the IAAF

Providing dignity and kindness lied at the heart of the formation of the Athlete Refugee Team, which, since its appearance in the Rio 2016 Olympic Games as the Refugee Olympic Team, has become a source of inspiration for millions of people across the globe, both on and off the track. Composed of athletes who have fled violence and conflict at home, the project provided a way for those athletes to pursue and live their dreams while drawing attention to their plights, one shared today by tens of millions of people around the world.

It was a global debut made possible in part due to a collaboration between the Tegla Loroupe Peace Foundation, which works with refugee communities in Kenya, and the IAAF’s Athletics for a Better World programme, which has worked with and supported Loroupe's foundation for more than a decade. In 2014 the foundation was granted US$20,000 by the IAAF to support its work with refugees. Through its continued support, the International Olympic Committee then made the team's Rio Olympic appearance a reality. Since 2017, the IAAF has invited and funded the team’s participation at each of its World Athletics Series events.

But the idea goes back even further.

"Tegla first spoke to me (about a refugee team programme) before the London 2012 Olympic Games," said IAAF President Sebastian Coe during a visit to the Tegla Loroupe Training Camp for Refugee Athletes in Ngong, Kenya, last July. "She had a vision, she delivered on that vision, and she took the team to Rio."

Their next appearance was meant to come at the IAAF World Cross Country Championships Kampala 2017 but administrative hurdles ultimately prevented the members from making the trip to Kampala.

Those hurdles were cleared the following month, enabling an ART quartet to travel to Nassau and compete at the IAAF/BTC World Relays Bahamas 2017. Gai Nyang, Wiyual Puok, Dominic Lokinyomo and Paulo Amotun contested the 4x800m relay in the Bahamian capital, where all but Amotun, who competed in Rio last year, got their first glimpse of what life as an international athlete entails.

In July, Lydia Philip Mamun, Sunday Kamisa Peter and Mohammed Ahmed Abubakar competed at the IAAF World U18 Championships Nairobi 2017, contesting the 400m, 800m and 1500m respectively. Mamun and Peter are originally from South Sudan and Abubakar from Ethiopia. Prior to the championships, Coe had an opportunity to visit Loroupe’s refugee training centre in Ngong.

"It was a heart-warming experience and one that I'll not easily forget thanks to the passion, vision and humanity of all involved," he said. "I deeply admire Tegla's determination in giving these refugee athletes hope, a chance to change their lives.”

The Ngong training centre, located 28km from the Kenyan capital Nairobi, offers accommodation, food, coaching, basic training facilities and a small monthly stipend to the athletes refugees who are based there. The athletes, originally from South Sudan, Somalia, Ethiopia and the Democratic Republic of Congo, all attend local schools and have access to trauma healing and counseling and training in peace building.

Less than one month later, the Athlete Refugee Team made its first appearance at an IAAF World Championships, with a five-member squad competing in London: Kadar Omar Abdullahi, Ahmed Bashir Farah and Dominic Lokinyomo on the men's team and Rose Nathike Lokonyen and Angelina Nadi on the women's.

The team capped its international season with another squad of five who competed at the Asian Indoor Games in Ashgabat, Turkmenistan, where the athletics programme concluded yesterday (20). The team included Amotun, Wiyual Puok Deng, Gai Yang Tap, Ukuk Uthoo Bul, and Yiech Pur Biel. The Games marked the first international competitions for Deng and Bul.

‘Sport is for peace’

“They are thrilled to get a chance to compete on an international stage,” said Loroupe, the former world record holder in the marathon. "There are few opportunities to compete, especially for refugees, so this is an exciting moment for them.

“We (brought) some new athletes who did not compete before, so now they have the chance they have dreamed of. It’s special for them, to be able to show their talent and physical abilities on a bigger stage. It means a lot. The refugee team is a team for humanity, and is one all nations can cheer for."

That idea was summarised well by Gai Nyang.

“Sport is for peace," Nyang said in Nassau.

“Whether African, refugees or whatever, we are all one. It’s not about representing any country; this is for refugees all over the world. In sport we are all one people – athletes."

In 2016, Loroupe received the UN Person of the Year in Kenya award for her work and efforts with the refugee team. In December, she became the first recipient of the inaugural IAAF President's Award.

Last month, the IAAF nominated Loroupe for her creation of the first ever Athlete Refugee Team in this year's Creative Sports Award International Category, sponsored by the Association of Summer Olympic International Federations. The award aims to celebrate and encourage "any initiatives, projects or programmes that apply creative works in the empowerment of Women in Sport".