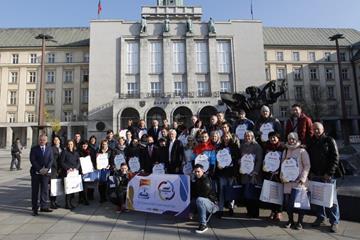 The calendar of athletic events for next year in the Czech Republic is clearly dominated by IAAF Continental Cup Ostrava 2018, which will take place in the eastern city on 8-9 September. However, athletics will be alive in the northern part of Moravia throughout the entire year thanks to the project ‘Ostrava supports continents’ which was launched today at a ceremony at Ostrava’s Town Hall.

Lead by the Czech Athletic Federation together with the City of Ostrava and the Moravian-Silesian Region, the concept involves a long-term competition for primary and secondary schools in the region. In total, 30 elementary schools and 27 secondary schools joined the project, in which each was assigned to a particular continent or region.

The project will be promoted by ambassadors and patrons composed of past international legends and current Czech athletics stars.

"The goal of the 'Ostrava supports continents' project is to involve children in regular physical activity, because athletics is the foundation of all sports and this connection offers the chance,” said Libor Varhanik, chairman of Czech Athletic Federation.

“To be interesting for the children, it is certainly important that they have their patrons in the competitions, so we co-operated with four leading Czech athletes who have become faces of a school project in which they will engage in various roles throughout the year.

"At the same time, we would like to take advantage of the fact that athletes from all continents will come to Ostrava. The ambassadors of each school is a former leading athletic star from each continent who will be connected directly with schools. We would like the children to learn about the culture, habits, or life of athletes in different parts of the world and other aspects just in conjunction with our ambassadors."

The “ambassadors” of the individual Continental Cup teams will be connected to the competing schools and have already sent them an initial letter of motivation to enter the competition.

"I have been to Ostrava several times and I have always received a warm welcome and support from an athletically knowledgeable audience,” Jackson said. “It's an honour for me.”

"Every project that brings children to the sport is important so I agreed to be a patron of it immediately, said Maslak, a patron of Africa.

"IAAF Continental Cup is a team competition, and the ‘Ostrava supports continents’ will also be a duel between teams,” said Kudlicka, patron of the Americas.

Spotakova became the patron of Asia-Pacific while Hruba will represent Europe.

The four Czech stars will not only serve as the faces of the project, but will also participate actively with personal visits to schools or via video messaging.

"Ostrava is a traditional and experienced organiser of international sporting events at the top level,” said Mayor Tomas Macura, who promised that his city’s hosting tradition will continue with this year’s Continental Cup.

“The IAAF Continental Cup, which belongs to the three biggest world athletic events together with the Olympics and the World Championships, will be the sporting highlight of the next year. Ostrava will host hundreds of guests from around the world.”

“We spend tens of millions not only for organising sporting events of international importance but also to support clubs, regular physical activities for children, youth, seniors and handicapped,” said the Governor of the Moravia-Silesia Region Ivo Vondrák.

“It is important for us to improve conditions not only for professional athletes but for amateurs as well. Therefore it is natural to support the project of Ostrava supports continents. “

The top athletes from the project will also be recognised and given their moment on the bigger stage. The competition’s pre-programme will include ‘Ostrava supports continents’ events on both days of the competition on the City Stadium track.