The pair have split their two head-to-heads on the World Indoor Tour this year, Ortega clocking a quick 7.49 to win in Torun on 6 February before Eaton evened the score two days later in Madrid, edging the Spaniard by a scant 0.01 in 7.56.

Eaton, a two-time US champion in the event, sits atop the World Indoor Tour standings with 25 points after three competitions, eight ahead of Ortega, who has competed twice. With the athletes' best three performances counting towards the overall series victory, the tour winner in the event will likely come down to this series-capping face-off.

Meanwhile, the women's triple jump will feature a rematch between the top-two finishers at last summer's European Championships, with Paraskeví Papahrístou of Greece taking on German Kristin Gierisch.

Gierisch, who jumped to world indoor silver in 2016 and European indoor gold in 2017, improved the German indoor record to 14.59m in Chemnitz on Sunday while Papahrístou, the 2016 world indoor bronze medallist, has yet to compete this winter. 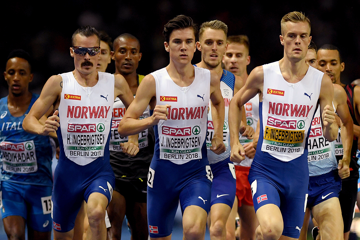