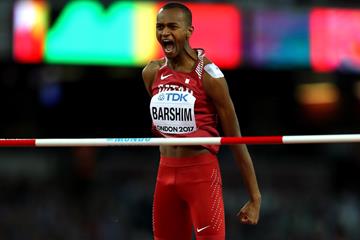 With 100 days to go until the start of the IAAF World Athletics Championships Doha 2019, action is heating up across the global athletics landscape, promising a full slate of thrilling competition when the sporting world's attention turns to the Qatari capital from 27 September to 6 October.

With Mutaz Barshim, one of Qatar’s biggest sporting stars, at the centre of attention, the men’s high jump will be among the most eagerly-awaited disciplines on the programme. The 2017 world athlete of the year was forced to the sidelines with an ankle injury for much of 2018, and is now rounding into form just in time. History’s second highest jumper, at 2.43m, is scheduled to return to action at the London leg of the IAAF Diamond League on 20 July in the same stadium where he jumped to the world title two years ago.

Likewise, a pair of his key competitors, Bogdan Bondarenko of Ukraine, the 2013 world champion who topped 2.42m in 2014, and Italy's Gianmarco Tamberi, the 2016 world indoor champion with a 2.39 lifetime best, also appear to be on a successful rebound from injury. Bondarenko cleared 2.31m in Rome in one of his two Diamond League victories this season.

With Qatar’s Abderrahman Samba as its chief driving force, the men’s 400m hurdles has become one the most exciting events on the international circuit. The World Championships final in Doha on 30 September promises to feature one of the greatest showdowns in the event’s history.

Last year, the full-lap hurdles race was all about Samba, who spent much of the season rewriting the all-time list. He ended 2018 as the second fastest man of all time at 46.98, on paper just a few hundredths of a second faster than Rai Benjamin, who ended 2018 equal third fastest after his 47.02 performance at the NCAA Championships. Both have started well - Samba leading the world with 47.27 from Shanghai, and Benjamin clocking 47.58 to win in Rome. But so has reigning world champion Karsten Warholm of Norway, who improved all the way to 47.33 in Oslo to break the European record. Meanwhile, Samba was forced to the Oslo sidelines with a bout of bursitis, an early season injury that adds yet another element of drama to that inevitable showdown.

The men’s flat 400m is promising fireworks with the anticipated face-off between rising US star Michael Norman, who blazed to a 43.45 personal best in his season’s opener in April, and South Africa’s Wayde van Niekerk, the reigning world and Olympic champion and world record holder, who also returns to action this season after injury.

On the women’s side, Genzebe Dibaba has illustrated that she's once again nearing her form of 2015, the year when she broke the world 1500m record and later raced to victory at the World Championships. She’s collected victories in Rome and Rabat clocking 3:56.28 and 3:55.47, respectively, two of the three fastest times of the year.

In the women's sprints, triple European champion Dina Asher-Smith of Great Britain is off to a solid start, clocking 10.94 and 22.18. But so is Jamaica's 2016 double Olympic champion Elaine Thompson, who sped to a 10.89 victory in Rome.

Other protagonists in compelling stories-in-the-making include living hammer throw legend Anita Wlodarcyzk of Poland who is on the mend from an ankle injury in pursuit of a fifth world title. Czech Barbora Spotakova, the reigning world champion in the javelin, is also back in action after taking 2018 off for her second maternity leave. In Doha she'll be chasing a fourth world title at 38.

For ticketing information, visit the official ticketing website at tickets.iaafworldathleticschamps.com/doha2019/.

For those wanting to travel to Doha for the IAAF World Athletics Championships Doha 2019, discounted travel packages through Qatar Airways and Discover Qatar are now available. A discount for travel via Qatar Airways can be found here: qatarairways.com/en-qa/offers/cug/IAAFQA19.html using the discount code IAAFQA19. Accommodation, tickets and Doha activity packages are available here: discoverqatar.qa/events/iaaf/.