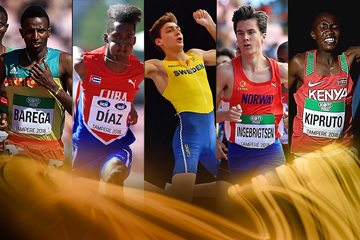 With just three weeks to go until the IAAF Athletics Awards 2018, the IAAF is delighted to announce the five finalists for the 2018 Male Rising Star Award to recognise this year's best U20 athlete.

The winner will be announced live on stage at the IAAF Athletics Awards 2018 in Monaco on Tuesday 4 December.

Armand Duplantis (SWE)
- European (senior) champion at pole vault with a world-leading height of 6.05m, which has been bettered outdoors only by Sergey Bubka
- World U20 champion
- Six world U20 records, indoors and out