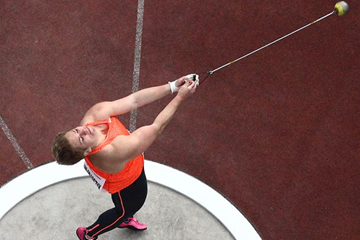 In less than one week’s time, the last two IAAF challenge series of 2017 will commence on opposite sides of the world.

On Saturday 20 May, the 2017 IAAF World Challenge gets underway with the Jamaica International Invitational in Kingston, one of the finest annual one-day gatherings of athletics talent in the western hemisphere.

Less than 24 hours later, the IAAF Hammer Throw Challenge kicks off its eighth season at the Golden Grand Prix in the Japanese city of Kawasaki, the second meeting of the IAAF World Challenge, and one of the best single-day competitions in Asia.

Spanning the globe from Kingston to Rieti

Kingston is the first of 10 IAAF World Challenge meetings to be held in as many countries over the course of the late spring and summer, concluding with the Rieti Meeting in Italy.

In between, the series traverses the globe, with stops in São Bernardo do Campo (Sao Paulo), Hengelo, Turku, Ostrava and Madrid before the IAAF World Championships London 2017.

It'll then pick up again with stops at long-time fixtures Berlin and Zagreb before the finale in Rieti. The latter will take on added significance after a tragic earthquake in central Italy forced its cancellation last year.

In 2016, World Challenge meetings played key roles in the lead-in to the Olympic Games with several athletes displaying the form that would propel them to the podium in Rio.

Kingston witnessed early season breakout performances by sprinters Elaine Thompson and Shaunae Miller-Uibo. In Kawasaki, Tianna Bartoletta won the long jump/100m double for the second successive year. Ostrava saw Thomas Rohler assume the top of the world list in the javelin. And in Madrid, Yulimar Rojas became the youngest woman in history to sail beyond 15 metres in the triple jump.

Similar scenarios are expected this year with the World Championships on the horizon.

The IAAF Hammer Throw Challenge will also consist of 10 competitions in 10 countries and it too will conclude in Rieti.

After its start in Kawasaki, it'll pass through São Bernardo do Campo, the Polish city of Szczecin, Turku, the Slovakian city of Samorin, Ostrava, Székesfehérvár and Madrid before landing in London for the World Championships. It'll then rejoin the World Challenge for the finale in Rieti.

In 2016, the Polish duo of Anita Wlodarczyk and Pawel Fajdek topped the challenge standings for the third time, and both are expected to be the leading protagonists again this year.

That's especially true for Wlodarczyk, the two-time world and Olympic champion and world record-holder, who recently extended her unbeaten streak to 31 competitions. The 31-year-old, who hasn't suffered a defeat since 16 June 2014 when she finished second in Ostrava, has extended the world record on four occasions during that time, most recently to 82.98m in Warsaw last August.

Points in the challenge are calculated by combining the distance of the best three throws in the series, with one point per metre. Last year Wlodarczyk amassed a record score of 240.44.

Fajdek meanwhile tallied 242.89 points to retain his title in the men's standings.