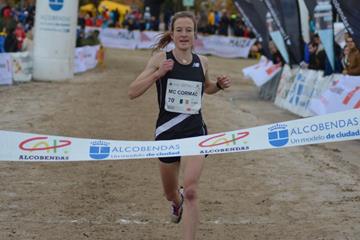 Kipruto and McCormack the favourites in Antrim

Kenyan Kipruto, who took the Olympic 3000m steeplechase title and lifted the IAAF Diamond League trophy in the event last season, will be making a rare appearance on the cross-country circuit this weekend.

A quality field is expected for the eight-kilometre event, which also includes Morocco's Soufiane El Bakkali who also lined up alongside Kipruto in Rio, finishing fourth in that event.

More recently the 21-year-old finished third over 9.4km at the Cross le Maine Libre in Allonnes, France in late November and third over 8km at the Moroccan Championships in December.

Great Britain's Andy Vernon, a regular in Greenmount, and Bahrain's Abraham Cheroben, who was a finalist in the 10,000m in Rio will also be taking part.

Vernon, who also took contested the 10,000m at last Summer's Olympics, was a part of the victorious Great Britain and Northern Ireland team at last month's European Championships in Chia, Italy, with his fifth place finish behind teammates Callum Hawkins and Andrew Butchart ensuring victory over Spain.

Vernon will take part in the Antrim International for the fifth time this weekend, with his most successful finish earning him a runner-up spot in 2010, in a race won by Kenya's Mike Kegen.

Fellow Great Britain Olympian Derek Hawkins, older brother of Callum, will also take part, in what are likely to be snowy conditions.

The 27-year-old struggled with injury problems in Rio, after having run the London Marathon in under 2:13 last April.

Twice winner at the IAAF Antrim International Cross Country, Fionnuala McCormack makes a return to Greenmount this weekend, in what is a strong field for the women's race on the 5.6-kilometre course.

The former double European champion and Olympic marathon runner comes into the race off the back of an impressive second place finish at the Great Edinburgh Cross last weekend.

It was a fifth runner-up finish for the Irish athlete, in addition to two previous wins.

McCormack is in strong form at present, and finished 20 seconds ahead of European Cross County fourth place finisher Ancuta Bobocel.

The Romanian who took part in the 3000m steeplechase in Rio will also be in action at Greenmount, and will pose a formidable challenge.

Others expected to be in the hunt include Kenya's Caroline Kipkiru who is a former African champion and a World top-20 runner over 10,000m. and Ethiopian Birtukan Adamu who was third in Antrim two years ago.

Ireland's Shona Heaslip and England's Pippa Woolven plus Louise Small should also be among the leaders. The Northern Ireland challenge will be led by Fionnuala Ross and Gladys Ganiel.

Cóilín Duffy for the IAAF