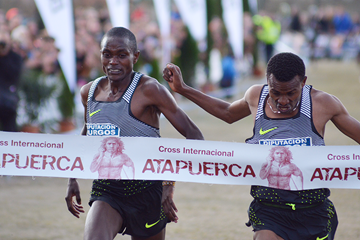 Bahrain’s Aweke Ayalew and Ethiopia’s Senbere Teferi will defend their titles at the ‘Cross de Atapuerca’ in Burgos on Sunday (12), the first of seven 2017-18 IAAF Cross Country Permit meetings.

Ethiopia’s Imane Merga became world cross country champion on the Spanish soil of Punta Umbría in March 2011 and later that year the then 23-year-old began an unprecedented winning streak of five wins in a row in this race.

‘Mr Atapuerca’, as he’s known at this Spanish location could not add a sixth win to his name last year, having to settle for third behind Ayalew and Uganda’s Timothy Toroitich, who finished almost even with one another. While his current form is a question mark after a lacklustre track season, Merga’s knowledge of the circuit and the support of the fans will play in his favour on Sunday.

As for the defending champion Ayalew, the 24-year-old enjoyed a superb cross country last year with notable wins in Atapuerca, Venta de Baños, Seville and a runner-up place in Elgoibar although he could finish no better than 24th at the World Championships in Kampala.

Yet, Ethiopia’s Muktar Edris can arguably be regarded as the field’s most successful athlete this season as he famously defeated Mo Farah in the 5000m at the World Championships. An accomplished finisher, Edris has placed successively runner-up and twice fourth on his previous appearances in Atapuerca so he will be eager to take the top spot for the first time and finish 2017 in style.

Toroitich will also be in contention this year in his first outing after lowering his 10,000m career best at the London worlds, where he finished 14th in 27:21.09. The Ugandan, a top-ten finisher in Kampala, will be joined by his compatriot Jacob Kiplimo, who took the world junior title last March at age 16. The rising star is also the reigning world junior 10,000m bronze medallist so Atapuerca will be his opening appearance on the senior scene.

The Kenyan armada will be compounded by Leonard Komon, Jairus Birech and Vincent Rono. The former is the current world 10km and 15km record holder thanks to his respective clockings of 26:44 and 41:13 back in 2010. More recently, Komon finished third at the 10km contest in Utrecht on 1 October, which is also the venue of his world records.

As for Birech, he was fifth here last year before placing 12th in the 3000m steeplechase at the World Championships, where he boasts an outstanding PB of 7:58.41 while Rono was a creditable seventh in Kampala and also holds a fine 59:27 PB in the half marathon set last September in Lille.

Women’s race – Another Ethiopia vs Kenya showdown on the cards

Ethiopia’s Belaynesh Oljira was looking for a hat trick of victories last season following her 2014 and 2015 wins but instead it was her countrywoman Senberi Teferi who won convincingly on that occasion. They will battle again on Sunday, with Teferi arriving after a fine 30:38 10km road performance in Tilburg last September after placing fourth in the World Championship 5000m while the former 10,000m and cross country bronze medallist Oljira took eighth in Kampala, two spots ahead of Teferi.

However, the Ethiopian tandem will face fierce opposition from their Kenyan arch-rivals in the guise of Alice Nawowuna Aprot and Lilian Kasait Rengeruk who took silver and bronze respectively at the World Championships in Kampala. Aprot, who holds an impressive 10,000m career best of 29:53.51, just missed the medals last summer in London she took fourth while Rengeruk is the youngest among the favourites as she claimed the Kampala bronze medal shortly before turning 20.

Bahrain’s Ruth Jebet should also be in the hunt for a podium place as the world record holder and Olympic champion in the 3000m steeplechase came seventh in Kampala.

Burundi’s Cavaline Nahimana (19th at the worlds) should also fight to finish in the top-five on Sunday while Spain’s Trihas Gebre, who is fresh from a 1:09:59 national record at the Valencia Half Marathon, will battle against Ireland’s former twice European cross country champion Fionnuala McCormack to be the first European home.

More than 5600 athletes will take part in the event in what promises to be an athletics party on Sunday. Weather forecasters predict a cold day with temperatures between 6 and 8 C but no rain is likely.