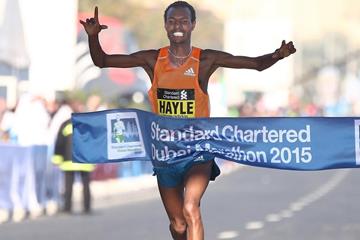 Berhanu and Negesse the favourites at Hengshui Lake Marathon

Berhanu, who celebrated his 24th birthday two weeks ago, has a personal best of 2:04:33 set at the 2016 Dubai Marathon where he finished second, one year after he won the Dubai Marathon in 2:05:28 to establish himself as one of the best runners in the world.

It will be his fourth marathon race in China since his debut over the classic distance in 2014. He claimed the Taiyuan Marathon title that year and went on to finish 15th at the 2015 IAAF World Championships in Beijing in 2:17:36. Last year, Berhanu clocked 2:08:27 to win the Xiamen Marathon.

The prolific Ethiopian also has 2014 Zurich Marathon and 2016 Boston Marathon titles to his name. His most recent outing was also in Boston but Berhanu failed to finish. On Saturday, his eye will be not be only on victory but also on the clock in order to break the 2:07:38 course record set by his compatriot Markos Geneti in 2014.

Endeshaw Negesse, also from Ethiopia, is the second fastest entrant with a PB of 2:04:52 from his fourth place finish in Dubai back in 2013. The 30-year-old also won the Tokyo Marathon with 2:06:00, the second fastest time of his career. But like Berhanu, Negesse also needs to prove his recent form as his only performance in the current season was a lackluster 2:26:17.

The field also includes Kenyan duo Dominic Ruto, who reduced his PB to 2:09:08 in Rome last year before setting the course record at the 2017 Beirut Marathon, and Mathew Kipsaat, a 2:09:19 performer who won the 2016 Tunis Marathon and 2017 Las Palmas Gran Canaria Marathon. But neither of the duo has managed to dip under 2:10 in 2018.

Benson Seurei of Bahrain in arguably the most in-form man in the field. As an accomplished 1500m man, the 34-year-old started his marathon career in 2017 and cut nearly five minutes off his PB to finish seventh at the Barcelona Marathon in March clocking 2:11:27.

Past winner Meseret Legese of Ethiopia is among the favourites in the women’s race. It will be the fourth time for the 31-year-old to run in Hengshui. Following a fourth place finish in 2012 and second in 2013, Legese registered a 2:28:04 victory in 2016. She also claimed victory at Wuhan Marathon the same year and her career best of 2:25:43, which is exactly the same mark as the Hengshui course record set by Kenya’s Agnes Jepkemboi Kiprop in 2015.

It will be the third marathon of the year for Legese, who finished fourth in Hong Kong and scored a 2:28:56 victory at the Chongqing Marathon.

Workenesh Edesa of Ethiopia is the other sub-2:25 runner toeing the line. The 26-year-old recorded her 2:24:04 PB in her victory at the 2016 Xiamen International Marathon. She also returned to Xiamen in 2017 to finish second with a 2:26:27 clocking, but hasn’t finished a marathon since.

The field also includes another four sub-2:30 runners including Ethiopia’s Waganesh Mekasha, who won the Padova Marathon in 2:29:18 five months ago, and Kenyan veteran Mirriam Wangari, whose PB of 2:07:53 was set in Xiamen in 2015. She proved her competitiveness with victory at the Gunsan Marathon in April.