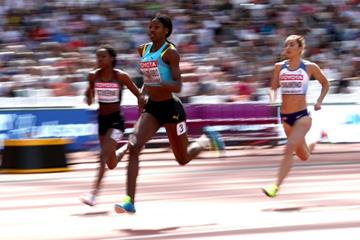 Shaunae Miller-Uibo will start as the favourite in her second event, putting her unbeaten 2018 season record on the line.

Miller-Uibo is undefeated in nine competitions this season, six of those over 200m. She successfully defended her IAAF Diamond League title with a 22.12 win in Brussels, clocked her 22.06 season's best in May, and won the Commonwealth title in April.

The Bahamian will be joined on the Americas team by Shericka Jackson, the Commonwealth runner-up and NACAC champion whose victories this season also include the IAAF Diamond League meeting in Paris where she clocked 22.05, a lifetime best.

Meanwhile, Europe can boast of Dutchwoman Dafne Schippers, winner of the past two world titles. The 26-year-old finished second at the European Championships after notching 200m victories in Hengelo and Ostrava. She will be joined by Bulgarian Ivet Lalova-Collio.

Marie-Josee Ta Lou, who took the 100m/200m double at the African Championships, is gunning for a similar double here as she represents her continent. She has clocked 22.34 this season, indicating she's arriving as a serious contender.

The Asia-Pacific squad includes Asian Games champion Edidiong Ofonime Odiong of Bahrain and Viktoriya Zyabkina of Kazakhstan who have 22.81 and 22.73 performances to their credit, respectively, this season.