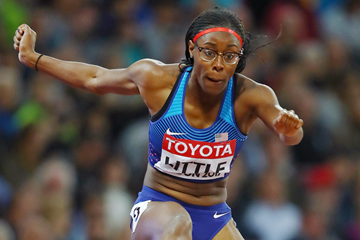 Shamier Little, beaten to the Diamond trophy in Zurich last Thursday by her US colleague Dalilah Muhammad, the Olympic champion, will want to end her season on a winning flourish.

To do so it looks as if her main task will be to overcome her Americas teammate Janieve Russell, as she did in Zurich. Little is second on this year’s world list with her 53.32 clocking in Toronto last month, with Jamaica's Russell one place behind her on 53.46.

South Africa's Commonwealth bronze medallist Wenda Nel has a season's best of 54.61, while Asia-Pacific runner Aminat Jamal of Bahrain has run 55.54 this year.

Europe will be represented by European silver medallist Anna Ryzhkova of Ukraine, who has a best of 54.51 this season, and the Briton who followed her home for bronze, Meghan Beesley.