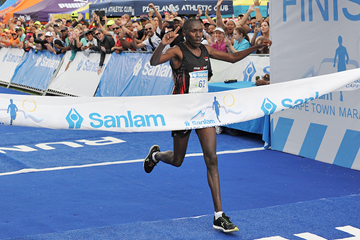 Course records are the target at the Sanlam Cape Town Marathon on Sunday (18), with a faster, flatter course attracting a solid international field to this IAAF Silver Label Road Race.

Shadrack Kemboi, who won the race last year in 2:11:41, will spearhead the international men's contingent which also includes sub-2:10 runners Teferi Fekadu Girma of Ethiopia, as well as nine-time European cross country champion Serhiy Lebid of Ukraine, who set a career best of 2:08:32 in Seoul two years ago.

"Ensuring we have quality fields which can run fast times is a key part of our goal to achieve IAAF Gold Label status, and we are pleased to again showcase a world-class line-up,” said race ambassador Elana Meyer, a former IAAF world half marathon champion and the 1992 Olympic silver medallist in the 10,000m.

“By introducing pacers, we are confident of seeing some record performances this weekend. We welcome all athletes in the elite field to the Mother City and we wish them all the best for the challenging contest that lies ahead."

The men’s course record is 2:10:45 set by Kenyan Willy Kibot in 2014, and the women’s 2:30:20 set last year by Kenyan Isabella Ochichi. Given the proper conditions, organisers haven’t discounted the possibility that the South African all-comers records of 2:09:50 and 2:27:37, held by David Tsebe and Frith van der Merwe since 1990, could also fall.

Kemboi vs Lebid in the men’s race

The fastest man in the field is Lebid, who made a promising 2:11:24 marathon debut in 2013 and improved to 2:08:32 the following year. More recently the 41-year-old clocked 2:10:21 in London one year ago, but was nearly four minutes slower in this year's edition.

The local contingent, aiming to earn the first South African win since the race was relaunched in 2014, consists of a mix of rising stars and experienced contenders who will be eager to outclass the foreign onslaught.

The domestic line-up will be carried by Lungile Gongqa, who finished second last year in 2:11:59, and former national champion Benedict Moeng. Gongqa, 37, will be looking to bounce back from his performance at the Rio 2016 Olympic Games, where he didn't finish. Moeng, 33, will be targeting his 2:10:21 personal best from 2014.

In the women's race, the international field will be led by Megerta Ifa Geletu of Ethiopia, who clocked 2:29:45 at the Dubai Marathon in January, and Kenyan Jane Kiptoo, who holds a personal best of 2:31:21. More recently, the 34-year-old Kenyan clocked 2:35:04 to win in Geneva in May.

The domestic challenge will be led by veteran Tannitha Maxwell, who clocked a career record of 2:32:33 at the Berlin Marathon in 2010, Keneilwe Sesing, who finished sixth last year in her debut in 2:43:38, Lebogang Phalula, who will make her first appearance over the 42.2km distance, and former national champion Zintle Xiniwe.