The 2019-20 IAAF Cross Country Permit series will kick off in Burgos on Saturday (9) with the Cross de Atapuerca, one of five stops in Spain, where Ethiopia’s Senbere Teferi will chase an unprecedented fourth win in the women’s race.

Already a three-time winner here, the 2015 world cross-country and 5000m silver medallist showed she was in great form two weeks ago in Valencia where she broke her own national half marathon record with her 1:05:32 victory.

Teferi is completing a solid 2019 season which also includes a sixth-place finish in the 10,000m at the World Championships in Doha. An accomplished track runner with PBs of 4:01.86 for 1500m and 14:23.33 for 5000m, Teferi’s knowledge of the Burgos circuit should play in her favour.

But the same applies for Kenya’s Margaret Chelimo, the runner-up over the past two years. The 26-year-old Kenyan earned the 5000m silver medal at the recent World Championships, improving her lifetime best to 14:27:49, and then won a low-key 4km race in the Italian city of Biella eight days later.

The toughest opposition for Teferi could come from Kenya’s world U20 cross-country and 5000m champion Beatrice Chebet, who holds a 14:46.12 performance for the distance, and Uganda’s Peruth Chemutai, who finished fifth in the steeplechase at the World Championships.

Norah Tanui, the third-place finisher last year, will also be in contention. The 24-year-old Kenyan is one of just five women to have bettered nine minutes in the 3000m steeplechase, a feat she achieved in 2018 thanks to her 8:59:62 performance in Brussels. She is also the only woman this year to beat world record-holder and world champion Beatrice Chepkoech in the steeplechase.

Fellow Kenyan Gloria Kite should fight for a top-five spot after her fourth-place finish last year. Still 20 years of age and a winner in Soria last year, she produced a fine 30:26 10km clocking in Valencia in January. The Kenyan contingent also includes Eva Cherono, a cross-country specialist who finished eighth at this year’s World Cross Country Championships in Aarhus and first in Alcobendas last year.

The Spain-based Kifle finished a creditable fourth in Aarhus and should be eager to improve on his runner-up spot from 12 months ago in Burgos. The 21-year-old is also a renowned road specialist, having earned bronze at the 2018 World Half Marathon Championships.

After a below-par performance at the World Championships in Doha where he was hampered by a stomach infection and finished 15th in the 10,000m, Kifle returned to competition two weeks ago and finished 10th at the Valencia Half Marathon in 1:00:25. He will compete alongside his compatriot and training partner Yemane Hailesilassie, a steeplechase specialist who holds the national record, claimed silver at the 2016 World U20 Championships and reached the 2016 Olympic final.

Thomas Ayeko was seventh in Aarhus, his best senior performance to date at a World Cross, and should be one of the athletes to beat on Sunday. The 27-year-old has fond memories of racing on Spanish soil as he earned the U20 men’s silver medal at the 2011 World Cross in Punta Umbría. His last outing came three weeks ago when he clocked a half marathon season’s best of 1:00:56 for third in Lisbon.

Joel Ayeko, no relation to Thomas, finished 10th at this year’s World Cross and earned the team gold medal. More recently he set a 10-mile career best of 46:42 to finish third in Zaandam.

They will be joined by Timothy Toroitich, a multiple winner at Spanish cross-country permit meetings in recent seasons. The 28-year-old set a lifetime best of 1:00:53 at last month’s Lisbon Half Marathon, finishing three seconds ahead of Thomas Ayeko.

The Ugandan contingent also includes Albert Chemutai, holder of an 8:12:29 steeplechase best, and watch out for Burundi’s Thierry Ndikumwenayo, a surprise top-10 finisher in Aarhus.

More than 6000 athletes from 16 countries will take part in the event in what promises to be an athletics party on Saturday. Weather forecasters predict a rainy and windy day with temperatures between 6-8C. 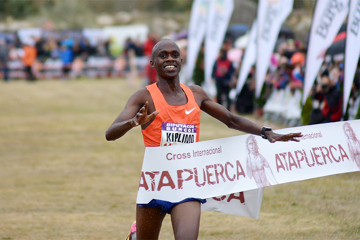 Kiplimo and Teferi reign at Atapuerca as IAAF...