Makau aims for hat-trick in Fukuoka

In its 70-year history, only four runners – USA’s Frank Shorter, Canada’s Jerome Drayton, Japan’s Toshihiko Seko and Ethiopia’s Gezahegne Abera – have won the Fukuoka Marathon more than twice. Among them, only Shorter and Seko have won this race three times in a row. Makau, having won this race for the past two years, has a chance to match them.

The course record of 2:05:18 was set by Tsegaye Kebede in 2009. Among the fastest marathons in the world, only Rotterdam has an older course record, so a new standard in Fukuoka is perhaps overdue.

“My condition is good and I am prepared to run well on Sunday,” said Makau at the pre-race press conference. “I think it is possible to run around 2:06 to 2:07 on Sunday.” He added that Tsegaye and Kwambai seem to be his toughest opponents and that he might make his move early instead of leaving it until the very end.

“How I race depends on Sunday’s weather,” said Tsegaye. “Even after the pace makers drop out (they are scheduled to cover 3:00 kilometres until 30km), I would like to keep up the pace.”

Of the Japanese athletes set to compete on Sunday, only Kazuhiro Maeda and Yuki Kawauchi have PBs faster than 2:09, but a recent calf injury for Kawauchi may mean that he might not be at his absolute best, while Maeda has not run faster than 2:11 since 2013.

Tomoya Adachi, Chiharu Takada and Yoshiki Otsuka – all of whom recorded their personal bests in Fukuoka – will also be vying for the coveted spots on the team. And there’s always a chance of a new Japanese runner coming out of the woodwork to claim a spot on the team.

“I have been injury free for the past year, so my training volume is at least 2000km greater than the average year,” said Adachi. “In the past three months I have done five or six 40km runs in about 2:15. I am keying off Kawauchi because I know he will be tenacious.”

Kawauchi, who is coming back from an injury, said: “I am pain free but I missed my half marathon work out at the Ageo Half as well as my interval work out.”

Historically, Japan-based Kenyans have run well in Fukuoka. Martin Mathathi, Joseph Gitau and Josephat Ndambiri have won the Fukuoka Marathon in the past five years while running for corporate-sponsored Japanese teams.

This year, four Africans who run for Japanese corporate teams are invited: Benjamin Ngandu, Melaku Abera, Yared Asmerom and marathon debutant Paul Kuira, who has a half-marathon PB of 59:47.

BACK
Pages related to this articleAthletes
Patrick Makau Musyoki 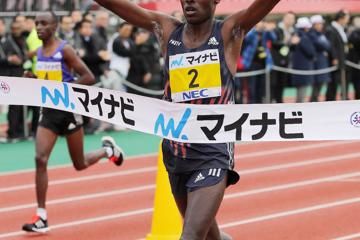