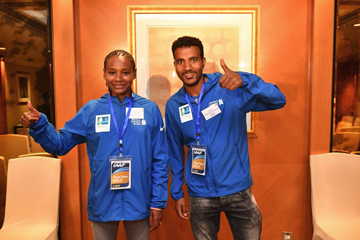 Belachew and Tollesa aim to retain titles in Hong Kong

The Ethiopian duo were unexpected winners in close races 12 months ago, but on Sunday they will line up for the race with the added weight of expectation.

Although the race isn’t known for producing fast times, Belachew set a personal best and race record of 2:10:31 last year after running negative splits. But, based on PBs, the 27-year-old is still one of the slowest in the field.

At 44 years of age, Kenneth Mungara is the oldest – and fastest – runner in the field. The Kenyan, who set a lifetime best of 2:07:36 in 2011, was recently selected for Kenya’s Commonwealth Games team. A consistent performer, Mungara clocked a season’s best of 2:09:04 last year when finishing second at the Gold Coast Marathon, a race he won in 2016 and 2015.

He will be joined by fellow Kenyans Robert Kwambai and Joseph Aperumoi, who have set respective PBs of 2:08:14 and 2:08:26 within the past three months, 2016 Hong Kong winner Mike Mutai, recent Buenos Aires Marathon winner Barnabas Kiptum and two-time Brighton Marathon winner Duncan Maiyo.

Madrid Marathon winner Bonsa Dida of Ethiopia and Uganda’s 2011 world U20 cross-country silver medallist Thomas Ayeko, both relative newcomers to the marathon, are also in the field.

The top four finishers from last year’s race will meet again on Sunday, but the Ethiopian quartet will be challenged by a strong Kenyan.

Tollesa won the 2017 Hong Kong title in 2:33:39 with just 17 seconds separating her from compatriots Aberu Mekuria, Betelhem Moges and 2016 winner Letebrhan Haylay. Tollesa went on to clock 2:23:59 at the Shanghai Marathon towards the end of 2017, coming within 47 seconds of the PB she wet when winning the 2015 Frankfurt Marathon.

Mekuria, Moges and Haylay all have PBs within the 2:24 to 2:25 range, while 2:23:33 performer and Gold Coast Marathon winner Abebech Afework adds further strength to the Ethiopian contingent.

But they will all have to be at their best if they aim to beat Sarah Chepchirchir. The 33-year-old Kenyan produced a stunning 2:19:47 run to win in Tokyo last year. She then successfully defended her Lisbon Marathon title in October and, having won the 2016 Xiamen Half Marathon in a PB of 1:07:52, heads to Hong Kong with a winning streak dating back to mid-2016.

With a best of 2:19:34, fellow Kenyan Lucy Kabuu owns the fastest PB of the field, but the 2006 Commonwealth 10,000m champion’s last marathon was three years ago.