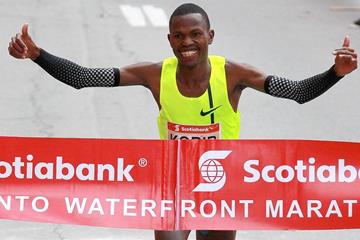 Kenyan Laban Korir will be among the favourites at the 38th edition of the NN Rotterdam Marathon, an IAAF Gold Label road race, on Sunday (8).

Organisers of the Netherlands’ premiere marathon have assembled a field of experienced runners and rising talents to provide an opportunity on Rotterdam’s proven fast course to make a further step in their careers, said race director Marc Corstjens.

Carlos Lopes (1985), Belayneh Densamo (1988) and Teglo Loroupe (1998) set world records in Rotterdam. Organisers are not aiming for records, but are expecting a slew of PBs similar to those produced at previous editions of the race. At least that’s what Corstjens has in mind.

‘This is a monument of a marathon, which will have a strong and wide field of top athletes,” he said, adding that the pacers midway target is 1:02.30. “And from that moment on, we will see how they will battle it out.”

The men’s race features eight runners with personal best of under 2:07, with Korir presented as one of the favourites for the podium at a pre-race press conference today. He was third last year in 2:06:25 and clocked his 2:05:54 lifetime best when winning the 2016 Amsterdam Marathon. He is member of the Eliud Kipchoge’s training group; earlier this week the Olympic champion sent him a message that read, “There are no limits in running”.

“Eliud taught me that you don’t just need a strong body, but also a strong and stable mind to perform well,” Korir said.

Getu Feleke of Ethiopia was second in Rotterdam in 2012 with a PB of 2:04:50, which still stands. He will be the fastest man in the field on Sunday. Last October he was third in Frankfurt in 2:07:46. Meanwhile, his countryman Mule Wasihun finished third in Amsterdam last year in 2:05:39. He has displayed good form recently, as shown by his victory in the Barcelona Half Marathon in February clocking 59:44. Kenyan Abera Kuma, the 2015 winner in 2:06:47, returns. Seven months before that victory he ran 2:05:56 in Berlin.

There are also two interesting debutants in the field, both from Kenya, Kenneth Kipkemoi and Vincent Rono. Kipkemoi, 33, has proven himself at half the distance for several years now, with a lifetime best of 59:01. Rono, 27, has been a pacemaker in recent years, and has a 59:27 personal half marathon best set last year in Lille.

In the small women’s elite field, Kenyan Visiline Jepkesho is the clear favourite.

Jepkesho clocked her 2:21:37 best last year in Paris and is hoping to finish closer to the 2:20 barrier. Two-time Houston winner Biruktayit Eshetu of Ethiopia, who has a 2:23:51 personal best, will be running together with her in the first half of the race.

The forecast calls for good conditions, with temperatures expected to rise later in the day. That won’t be a problem for the elite field which can expect temperatures of about 12C when the guns sounds the start at 10:00 at the foot of the Erasmus Bridge. But if the sun breaks through the clouds it will be about 18C around midday. Most of the 16,000 registered runners have been preparing in almost freezing conditions over the past few weeks in the Netherlands.