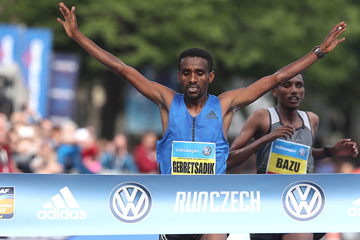 No fewer than 13,500 runners will gather in the Spanish capital to take part in the 41st Rock ’n’ Roll Madrid Marathon on Sunday (22) when an intriguing battle among African athletes is on the cards at the IAAF Gold Label road race.

Samuel Tsegay can arguably be regarded as one of the athletes to beat. The Spain-based Eritrean finished sixth on his last outing over the distance in Valencia last November when the 29-year-old clocked 2:07:34, barely six seconds outside his career best. More recently, the 2014 world half marathon silver medallist finished 18th in Lisbon last month in 1:02:08.

He will be joined by fellow Eritrean Okbay Tsegay, a 1:03:10 specialist over the shorter distance.

The large Kenyan contingent is headed on this occasion by Ronald Korir, a 2:07:29 athlete back in 2014. He finished third last year in Madrid and will be making his second appearance this year over the distance after a 2:13:03 effort in Dubai in January.

Other Kenyans racing in Madrid on Sunday include Julius Tuwei, who finished seventh in Valencia last year in a PB of 2:08:06 but more recently clocked 2:14:20 to finish 10th in Daegu, Jackson Limo, who set a career best of 2:09:06 in 2014 and won in Porto last November in 2:11:34, and Joseph Kiprono, who won in Madrid last year over the half marathon distance and will now try to replicate that success over 26.2 miles.

Kiprono, who has a marathon PB of 2:09:56, recently clocked 1:01:41 at the Azkoitia-Azpeitia Half Marathon last month and will be contesting his first marathon in five years.

Alfonce Kigen, William Kibor and 2011 world cross-country bronze medallist Vincent Chepkok should all also be in the hunt for a podium place.

Gebretsadik Abraha, the quickest entrant thanks to a 2:06:21 PB set in Amsterdam 2012, will spearhead the Ethiopian challenge. The 2010 world junior 10,000m silver medallist will try to bounce back from his run in Santa Monica five weeks ago when he clocked 2:11:56.

The altitude of Madrid, which is 695 metres above sea level, and the undulating profile of the race route has meant that the course record remains a relatively modest 2:09:15, set by Kenya’s Ezekiel Kiptoo Chebii four years ago.

Boulaid Kaoutar may not have the fastest PB in the field, but she heads to Madrid off the back of a victory in Seville in February, winning in a lifetime best of 2:25:35. The 28-year-old, who is based in Spain, has won two different half marathons in Madrid over the past two years.

The demanding course means Kaoutar likely won’t come close to her PB, but her current form appears to be better than any of her rivals.

Ethiopia’s Bethlehem Moges has a 2:24:29 PB from 2015, but earlier this year she recorded 2:30:54 in Hong Kong. Compatriot Aheza Kiros also holds a 2:24:30 career best but Sunday’s race will be her first competition for almost three years.

Weather forecasters are predicting a sunny day with temperatures ranging between 18-20C by the time of the event and no likelihood of rain during the races.