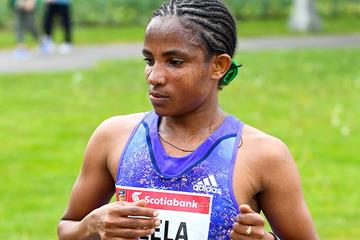 Ottawa is unique in the world of road racing in that it has two IAAF Gold Label road races on the same weekend: the Ottawa 10k on Saturday 27 May and the Scotiabank Ottawa Marathon on Sunday 28 May.

Although it provides thousands of visitors to the Canadian capital, double the action there can also be twice the headache for organisers.

After Ottawa 10k favourite Geoffrey Mutai pulled out a few weeks ago with injury, race director Manny Rodrigues was hit this week with the news that Mutai’s Kenyan compatriot Simon Cheprot, another pre-race favourite, has also withdrawn. Further disappointing news landed from Morocco when defending Ottawa champion Mohamed Ziani excused himself due to passport/visa issues.

“Well, everything was going along smoothly – too smoothly,” Rodrigues joked this week. “We have a great weather forecast and some excellent talent, so I’m hoping it will translate to some great racing and fast times.”

Rodrigues can still point to a top calibre 10km field including 2015 Ottawa champion Nicholas Bor of Kenya who out-kicked Cheprot to claim the victory two years ago. With a personal best of 27:38, he is now the bona fide favourite.

Two young men with Japanese connections appear the ones most likely to provide Bor with competition. Leul Gebreselassie of Ethiopia competed for Tokyo Kokusai University and has a 10,000m track PB of 27:19.71, while Japanese international Kenta Murayama, whose 10,000m PB of 27:39.95 is just 10 seconds shy of the Japanese record, is keen to challenge the east Africans.

The Ottawa 10k serves as the Canadian 10km Championships. Three-time Canadian Olympian Eric Gillis, who was 10th in the marathon at last year’s Olympics, will provide the home crowd with excitement. Before he turned to marathon running, he ran 28:07.19 for 10,000m.

Ethiopia will counter with 2015 world cross-country bronze medallist Netsanet Gudeta, who set a 10,000m PB of 30:36.75 last year, and Amane Gobena, who finished second at last year’s Tokyo Marathon with a PB of 2:21:51. Gobena is also a capable 10km runner and should easily lower her 32:12 personal best.

But Natasha Wodak will surely be the crowd favourite. The 35-year-old, who holds the Canadian 10,000m record of 31:41.59, finished fourth in this race two years ago with a 10km road PB of 31:59. But after representing Canada at the Rio Olympics, she is battling back from surgery to correct an injury to her foot.

Once again the women will be given a head start – this year three minutes and 10 seconds – with a $4000 gender bonus being paid out to the first runner to cross the finish line.

Ethiopia has thoroughly dominated the marathon here with the women winning seven years consecutively while the men’s streak lies at four.

Koren Jelela returns to defend her title. The 30-year-old, who holds the Canadian all-comers’ record of 2:22:43 from the 2011 Toronto Marathon, will once again be challenged by fellow Ethiopian Aberu Mekuria who won this race in 2015 and finished second to Jelela a year ago. Sechale Adugna, third last year, also returns.

Another Ethiopian to watch is a relative newcomer to world-class marathon running, Hiwot Gebrekidan. The 2012 world U20 3000m silver medallist made her half marathon debut last year with a 1:08:00 victory in Copenhagen. More recently she won the Tiberias Marathon in a PB of 2:25:45 in January this year.

A trio of world-class Ethiopian men, hoping to extend their country’s winning streak here to five, will be making the flight from Addis Ababa.

The latter is finally over injury and illness. And though his marathon personal best remains 2:14:18, he is a proven world-class distance runner. Three Commonwealth gold medals at 5000m and 10,000m, plus his 2005 world 5000m bronze medal attest to this.

Besides the first place prize money of $40,000, a Hyundai Tucson is on offer to whomever can beat the Canadian all-comers’ marathon record. Those are held by Yemane Tsegay with his 2:06:55 from the 2014 Ottawa Marathon and Jelala’s 2:22:43 which was set in Toronto in 2011.