Twelve months on from her convincing victory at the Volkswagen Prague Marathon, Bornes Jepkirui is back in the Czech capital to defend her title at the IAAF Gold Label road race on Sunday (5).

Jepkirui, world ranked No.33 in the marathon, clocked a PB of 2:24:19 in Prague last year, winning by 54 seconds. Earlier this year she finished third in Osaka in 2:26:01, the second-fastest time of her career.

But given the quality of this year’s Prague Marathon field, the Kenyan may not have it all her own way again.

Since winning the European 10,000m title last August, Israel’s Lonah Chemtai Salpeter, world ranked No.69, has shown fantastic form on the roads, winning over 10 miles in Zaandam and 10km in Rome, clocking a national marathon record of 2:24:17 to win in Florence, and more recently setting another national half marathon record to finish second in Prague in 1:06:09.

Lucy Cheruiyot finished two places behind Salpeter in Prague earlier this year, running 1:08:27. Although the Kenyan is a regular in Czech half marathons, the 22-year-old will still be stepping into the unknown on Sunday as it will be the first marathon of her career.

USA’s Kellyn Taylor-Johnson, who set a big PB of 2:24:29 last year, could challenge for a podium position. Getnet Yalew, who has represented Ethiopia at various major championships, should also feature among the leaders.

Mathew Kipkoech Kisorio, who recorded a lifetime best of 2:04:53 in Valencia last year and is world ranked No.13, starts as the fastest in the men’s field, but he may still be feeling the effects of the Eldoret Marathon, which he won two weeks ago in 2:12:38.

Al Mahjoub Dazza, world ranked No.77, finished just half a minute behind Kisorio in Valencia in December, clocking a Moroccan record of 2:05:26 in what was just his second marathon to date. He contested the Birell Grand Prix in Prague in 2017 so will be vaguely familiar with the streets of the Czech capital.

Kisorio’s brother, Peter Kimeli Some, is the third athlete in the field whose PB is quicker than Prague’s course record of 2:05:39. Some clocked 2:05:38 to win the 2013 Paris Marathon and came just a minute short of that mark when finishing third in Daegu last year in 2:06:49.

Solomon Kirwa Yego also set his PB in Valencia last year, clocking 2:06:24 for eighth place. This will be his second marathon in Prague, following his 2016 run – his debut at the distance – when he finished third in 2:08:31.

Other strong Kenyans in the field include Paul Maina and 2009 world half marathon silver medallist Bernard Kiprop Kipyego.

Ethiopia’s Aychew Bantie, the runner-up in Kosice last year in a PB of 2:08:15, will also be on the start line alongside Ukrainian Olympian Oleksandr Sitkovskyy and Spain’s Hamid Ben Dauod. 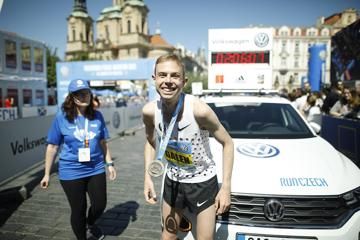