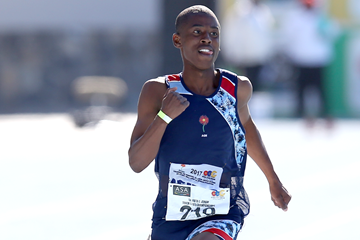 There is only one sub-21-second boy in the field, South Africa’s Retshiditswe Mlenga, who will double back from the 100m and hope to continue his nation’s sprint resurgence by taking this title.

However, the 17-year-old’s personal best dates back to April 2016 and was set at altitude in Germiston, and his fastest this year was the 21.14 he clocked to win his national U18 championships in early April.

He has raced sparingly since, his only outing since April a 10.44 clocking over 100m in Pretoria last month. He will be backed up in Nairobi by teammate Tshenolo Lamao, who has run 21.18.

Their chief threat is likely to come from Jamaica’s Xavier Nairne, who clocked an impressive 21.17 into a headwind (-0.6m/s) to win his national U18 championships in Kingston a fortnight ago.

The European charge is headed by Germany’s Luis Brandner, a 21.30-second performer, and Czech Republic’s Daniel Vejrazka, who has run 21.35. Others worthy of respect include Zimbabwe’s Donovan Mutariswa, Joel Johnson of The Bahamas and Paul Tritenne of France.