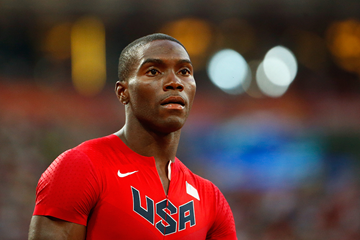 Back then, with his record-breaking flat speed, the US hurdler looked set to dominate his event for years to come. But he had to settle for silver at the 2008 Olympics and, despite retaining his world title the following year in Berlin, until recently there was a sense of a talent unfulfilled. There were no more global titles, despite making the US team for the 2012 Olympics and the 2013 and 2015 World Championships.

Then last year, just a few weeks shy of his 31st birthday, Clement took a long awaited Olympic gold. Now, back in London, where he could only place eighth in 2012, the seventh fastest one-lap hurdler ever seeks to secure his third individual world crown.

He has an excellent chance, running into form at just the right time following an inauspicious start to the season. He only made the US team as the 2016 Diamond Trophy winner having finished seventh at the trials, but won last month at the London IAAF Diamond League meeting in 48.02, placing him second on the 2017 world list.

Top of that list thanks to a 47.80 clocking back in May is Kyron McMaster of the British Virgin Islands. The 20-year-old was second behind Clement in London last month and, while he has raced sparingly, has been below 49 seconds on four other occasions this season.

But the 400m hurdles is an event where, such are the physical and technical demands, it is possible for any number of contenders to feature if they get it right on the day.

The list of athletes with the potential to win a medal is a long one. There’s the US trio of Eric Futch, who won the national title, TJ Holmes and Michael Stigler, and the Jamaicans, Jaheel Hyde and Kemar Mowatt, all of whom will believe that gold is a real possibility.

Likewise, Norway’s Karsten Warholm recently won the European U23 title in 48.37, having also finished first at the Oslo IAAF Diamond League meeting in 48.25, and will run without fear.

European champion and Olympic bronze medallist Yasmani Copello leads the IAAF Diamond League standings thanks to a consistent set of performances and his best time of the season, 48.24, was also set in London, where he placed third.

Abderrahaman Samba of Qatar won at the Doha IAAF Diamond League meeting and watch out, too, for Javier Culson and Kariem Hussein, both of whom have major medals to their names.