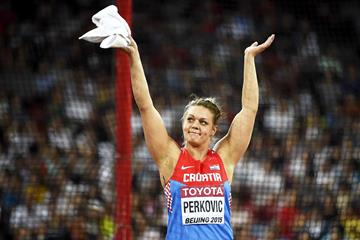 Sandra Perkovic heads to the 2017 IAAF World Championships seemingly destined to repeat the Midas touch that took her to Olympic gold in the same London Stadium back in 2012.

The 27-year-old Croatian, who last year retained her Olympic discus crown in Rio, tops the 2017 world list with a mighty 71.41m, the national record distance she achieved in Bellinzona, Switzerland, on 18 July – the farthest throw in the world since 1992. She also boasts the second and third best marks of the year: 70:23m and 69.58m.

And yet, despite the timely boost in confidence Perkovic gained with her brilliant series in Bellinzona – 69.08m, 69.02m, 65.77m, 66.87m, 71.41m, 70.05m (the most consistent of her career and the first time since 1990 that anyone had thrown beyond 70 metres twice and 69 metres four times in the same competition) – there may be seeds of doubt lodged somewhere near the back of her mind.

For one thing, having swept through the whole of 2016 in invincible form, Perkovic has twice tasted defeat in 2017. Both losses were inflicted by Yaimi Perez, the 26-year-old Cuban who won the 2010 world U20 title but who is still seeking her first global medal as a senior.

Perez came close at the 2015 IAAF World Championships in Beijing but missed out on bronze to Germany’s Nadine Muller by seven centimetres, placing fourth. In Moscow in 2013 she finished 11th and in Rio last summer she failed to make a mark in the final. At the London Olympics in 2012, she failed to make the final, ranking 29th in qualifying.

But this time it promises to be different for Perez. At the IAAF Diamond League meeting in Stockholm on 18 June, the Cuban brought an end to Perkovic’s 16-meet winning streak. Perez opened with 67.92m and the best Perkovic could manage in response was 67.75m.

It was Perkovic’s first defeat since the 2015 IAAF World Championships in Beijing, where she was out of the medals until a last-round effort of 67.39m secured silver behind Cuban Denia Caballero’s winning 69.28m. And it was swiftly followed by a second loss, Perez throwing 69.19m – second best on the 2017 world list – to eclipse the Zagreb woman’s 68.30m at Sotteville in France on 7 July.

Consistency at major championships has become a problem for Perkovic, who fouled her first two attempts in qualifying in Rio and registered just one valid mark in the final. Perez would appear to be the rival best equipped to exploit any wobble in London; the two women stand clear of the field at the sharp end of the world list.

Should the fight for gold and silver go to form, the battle for bronze could be an open affair.

Australia’s Dani Sevens, the 2009 world champion, lies third on the world list with a 66.78m throw from February. Then comes Gia Lewis-Smallwood of the USA (65.81m), defending champion Caballero (65.78m) and Muller (65.76m). Veteran French thrower Melina Robert-Michon, who took Olympic silver in Rio at the age of 37, stands joint 14th with a modest season’s best of 63.63m.