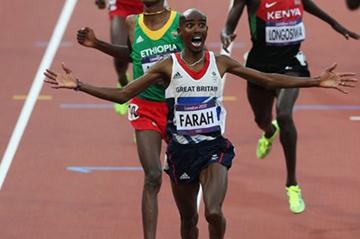 The question of the men’s 5000m comes in two parts.

First, has the combination of another year of age, the 10,000m final he will already have run, and the accumulating weight of his medals slowed Mo Farah’s closing burst at all?

Second, will any of his aspiring rivals work together to beat him, or has one of them developed the speed and savvy needed to do it alone?

Coming in to the Rio 2016 Olympic Games, Farah is the defending champion in both this race and its longer cousin, a hero of the London 2012 Olympic Games after winning the distance double there, and now the three-time defending world champion at this distance.

Into the bargain, he is also the world leader having run 12:59:29 to win at the IAAF Diamond League meeting in London.

He as dominant in championship races as Bekele and Gebrselassie were in their halcyon days, perhaps more as he has won the double in three consecutive global championships.

The 10,000m final may give a better preview of how ready Farah is to defend his 5000m title, but his cast of challengers will be entirely different in this race.

The two men who came closest to unseating Farah at the IAAF World Championships Beijing 2015, Caleb Ndiku of Kenya and Hagos Gebrhiwet of Ethiopia, will both be in Rio and ready for another crack at the Briton.

Ndiku needs to step up

Ndiku has raced sparingly so far in 2016, a lacklustre outing at the IAAF Diamond League meeting Eugene, finishing 10th, his best so far.

Gebrhiwet has been more prolific and more successful, winning in Oslo and running his best time of 2016 just behind his Ethiopian teammate Dejen Gebremeskel in Boston.

As the silver medalist to Farah at the 2012 Olympics, Gebremeskel is also worth another word; he also has a bronze medal from the 2011 world championships.

His most brilliant races haven’t yet aligned with the major championships, but should Gebremeskel click in Rio then he might have the finishing speed to stay with Farah, and his results so far in 2016 suggest his conditioning is good.

Another faction to look out for are the milers stepping up.

Most promising among them is Morocco’s former world indoor 1500m champion Abdelaati Iguider, who ran 12:59.25 in Brussels last year but he is also entered for the 1500m which takes place before the 5000m.

An intriguing face is USA's former 5000m world champion Lagat, who is now 41. Lagat was fourth and just outside the medals in London four years ago, but took silver in Daegu the year before.

Lagat qualified for Rio with a fantastic closing surge at the US Olympic Trials, exactly the sort of race he’ll need to deliver to get in the medals again.

First, he’ll have to make it to the final, but now in his fifth Olympics, few in the field have Lagat's experience and tactical acumen experience.