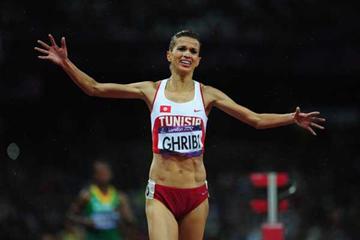 It may be a sign of the increasing maturity of the women’s 3000m steeplechase as an Olympic event that at the Rio 2016 Olympic Games, the third Olympics to hold the event, there are no clear favourites.

What’s more, unlike in the men’s event where Kenya’s dominance has lasted a generation, the leading women come from an array of nations and continents.

Ghribi stands only 12th on the 2016 world list, but that mark came with a victory at the IAAF Diamond League meeting in London last month, so she has reason to arrive in Rio with confidence.

She doesn’t lack fast times: last September she ran what was then an African record of 9:05.36 at the IAAF Diamond League meeting in Brussels.

Most of the 2016 list leaders come from one very fast race, the IAAF Diamond League meeting in Eugene was won by Bahrain’s former world junior champion Ruth Jebet in a breath-taking 8:59.98.

Jebet is now the second-fastest woman ever and only the second to run the event in less than nine minutes. She is co-leader of the Diamond Race with two wins so far; she’s tied with Hyvin Kiyeng, the Kenyan ace who won the world title in Beijing last summer.

Kiyengi came up second just 0.03 behind Jebet in Eugene, clocking 9:00.01, and thus stands third all-time. Should the two stage a similarly aggressive race in Rio, rather than standing off and waiting for the other to move, there’s no reason they couldn’t threaten the Olympic and world record of 8:58.81.

Jepkemoi’s Kenyan teammates will be Beatrice Chepkoech and Lydia Rotich.

For a change from the men, the Ethiopian women actually look deeper than the Kenyans and their team of Etenesh Diro, Sofia Assefa and Hiwot Ayalew are all potential finalists and among the fastest qualifiers for Rio. Ayalew was fourth in London, the last to fall off the lead pack as the pace intensified.

The 2016 European champion, Gesa Felicitas Krause of Germany, won the bronze medal in Beijing in a memorable blanket finish and is tied for seventh on the 2016 world list, which happens to also be the place she finished in the London final four years ago.

US champion Emma Coburn was third in that speedy Eugene race won by Jebet in a North American record of 9:10.76 and is consequently third on the 2016 list. She was eighth in London four years ago, right behind Krause, and has the aim of improving on that placing.