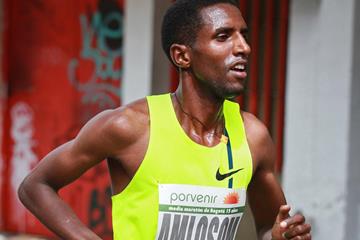 The race is held on a slightly downhill 10km point-to-point course and starts alongside Real Madrid’s Santiago Bernabeu stadium before finishing on the pitch of another Spanish first division club, Rayo Vallecano, in Madrid’s southern suburbs.

In the men's section, following the last-minute withdrawal of two-time winner Kaan Kigen Ozbilen due to a calcaneus injury, the role of favourite should go to Eritrea’s Nguse Amlosom, who trains under the guidance of the Spanish coach Jerónimo Bravo. The 30-year-old was a creditable ninth in the 10,000m at the Rio 2016 Olympics, clocking 27:30.79. He is also an accomplished road runner and holds a half-marathon PB of 59.39. Amlosom has finished in the top three at no fewer than 19 of his past 25 road races.

But the most experienced athlete in the field by far will be 2006 European 5000m champion Jesús España. Now aged 38, he finished runner-up at this race 15 years ago and at the 2014 edition.

Fifa, Lamdassem and Mechaal finished sixth, seventh and eighth respectively at the European Cross Country Championships while Abadía was just a few seconds behind Kigen Ozbilen in 11th. All five local stars will be aiming for a podium place, Mechaal being the only one having not taken a top-three place so far.

Watch out too for Donn Cabral of the US and Britain’s Chris Thompson. Cabral has a steeplechase PB of 8:13.37 and finished eighth at the 2012 and 2016 Olympics. More recently, the 27-year-old placed eighth at a road race in the US city of Manchester where Thompson, the 2010 European 10,000m silver medallist, finished third.

Morocco’s Jaouad Tougane, a 13:16.12 5000m specialist who beat España at a low-key cross-country race earlier this month, could also prominently feature in Madrid.

The women’s cast is headed by Kenya’s Brigid Chepcheshire Kosgei. Still relatively unheralded, she boasts a marathon PB of 2:24:45, set when finishing second in Lisbon in October, but her most recent outing was a 2:31:11 victory at the Honolulu Marathon less than three weeks ago, which might hamper her winning chances here.

France’s Liv Westphal will be trying to take advantage of any sign of weakness from the Kenyan. The European under-23 5000m champion, currently a student at Boston College, recently finished ninth at the European Cross Country Championships.

Karolina Nadolska (nee Jarzynska) could also be a factor on Saturday. Holder of the 31:43.51 Polish 10,000m record, she was sixth in the Manchester road race in late November while her last outing came in Porto where she was second in 33:15 over 10km.

Forecasters predict a cold night on Saturday with temperatures ranging between 4-6 C by the time the gun goes for the last IAAF Label Road Race of 2016.

In addition to the elite contest, there will be a mass race with no fewer than 40,000 entrants taking to the streets two-and-a-half hours before the main event.