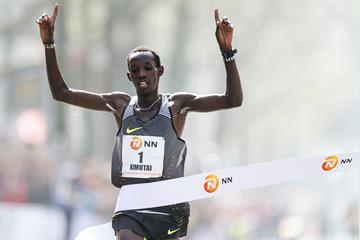 Marius Kimutai will line up for the Seoul Marathon with the aim of achieving his third successive victory over 26.2 miles, but the Kenyan faces a tough challenge at the IAAF Gold Label road race on Sunday (17).

For what can often be an unpredictable event, the 26-year-old has an impressively consistent record at the marathon distance. He has finished on the podium at 11 of his 12 marathons to date, winning six of those races.

But Sunday’s race could be one of his toughest marathons to date as he faces two other men with sub-2:06 personal bests, one of whom is a three-time winner in Seoul and course record-holder.

He returned to Seoul last year, but in a high-quality race finished fifth in 2:06:27. He failed to finish the Gongju Marathon seven months later, but is determined to put that behind him with a good run on Sunday.

Like Kimutai, Deribe Robi will be contesting the Seoul Marathon for the first time. The Ethiopian set his best of 2:05:58 at the 2015 Eindhoven Marathon. He already has one marathon under his belt this year – a 2:12:09 run in Xiamen – and ran 2:06:38 at the Valencia Marathon five months ago.

At 39 years of age, Oleksandr Sitkovskyy is the most experienced man in the field. The Ukrainian has competed at three Olympic Games, his best result being a 12th-place finish in 2012, while his PB of 2:09:11 was set just a few years ago in Marrakech.

The women’s race also features someone who knows how it feels to win in Seoul.

With a best of 2:21:56, Mulu Seboka is the fastest woman in the field. The Ethiopian’s best performance last year, however, was 2:29:17 and her last victory came in 2014, the year in which she won in Dubai, Daegu and Toronto.