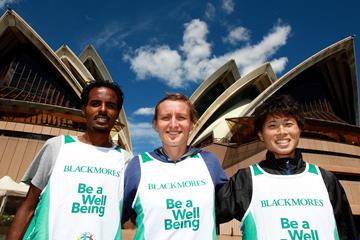 Shumay’s marathon debut under the spotlight in Sydney

There are many unknowns about the marathon, but the 2016 Blackmores Sydney Marathon on Sunday (18) offers a little more intrigue than the average 42.195km journey.

While retaining a starting point in North Sydney and the showcasing of two Sydney icons in the Harbour Bridge, which it crosses in the first five kilometres, and the Sydney Opera House, where the race finishes, the course has been tweaked. Race organisers promise this will make the IAAF Gold Label Road Race course “flatter and faster”, which remains to be seen.

But they are on safer ground with the third part of the commitment that it will be “even more beautiful.” Like New York, Sydney, with its harbour and luxuriant inner-city parks, is a city to be enjoyed more than one in which to attack marathon records.

Nonetheless, the race records of 2:11:18 and 2:29:42 should both be in reach for the winners given the deep and even men’s and women’s fields assembled.

Two names at opposite ends of the age and experience spectrum stand out as possible winners. Eritrea’s 19-year-old Mogos Shumay makes his marathon debut, backed by impressive recent credentials at cross-country, half-marathon and World U20 championships while, in the women’s field, 35-year-old Karolina Nadolska, an accomplished track distance athlete and runner-up in the 2014 Osaka Women’s marathon, returns to the 42.195km event after a year off for the birth of a baby daughter.

There will be no lack of competition in either field. Five men boast personal bests faster than 2:10, with three of those – Ethiopia’s Mulugeta Wami and Debebe Tolossa, and Essa Ismail Rashed of Qatar – having run 2:07.

Merima Mohammed of Bahrain has the fastest PB on the women’s side at 2:23:06 with Jarzynska one of four others with fastest times in the 2:26-range.

For one so early in his career, Shumay brings performance credentials most would be happy to take into retirement. He was 14th in the U20 race at the IAAF World Cross Country championships in Guiyang in 2015. Later that year, still only 18, he ran 1:01:09 in finishing 10th behind 2016 world half-marathon silver medallist Bedan Karoki.

Shumay ran through 10km in that race in 27:58, just over a second slower than the track 10,000 metres PB of 27:56.96 that he ran in the Payton Jordan Invitational meeting in Palo Alto earlier in 2016. All of this suggests great potential at the marathon distance, similar to his compatriot Ghirmay Ghebreslassie, winner of the 2015 world title in the marathon just before his 20th birthday.

Wami’s 2:07:11 best dates back to Amsterdam in 2012, but his more recent 2:08:37 last year suggests he remains a serious threat to those with winning aspirations in Sydney. Tolossa’s 2:07:41 also goes back to 2012, but he has run 2:09 times both in finishing third in Houston and seventh in Warsaw last year.

Another debutant, Sota Hoshi, has good track performances and has run a 1:01:18 half-marathon. He may prove to be the best of the Japanese entrants as Tomohiro Tanigawa and Takuya Noguchi boast best times of 2:11 and 2:12 respectively.

Nadolska vs Mohammed in women’s race

Nadolska, who made her marathon debut under her maiden name Jarzynska as long ago as Warsaw in 2007, was consistently in the 2:26-2:30 range through to 2014 when she took time off for the birth of her daughter. She has not raced much since then, but a record which also includes 15:25/31:43 performances and a 15th place in the 10,000 at the Moscow 2013 world championships commands respect.

Merima Mohammed has personal bests of 2:23:06 and 1:08:36, though both date back to the earlier part of her career. Looking at more recent form, Goitetom Haftu, with an eighth place 2:27:44 in Dubai two years ago and a 2:30:19 in Santiago last year, looks a more obvious challenger as does China’s Yinhi Le with a 2:27:35 from last year and 37th place in the world championships in Beijing.

The race is certain to crown new champions as neither of last year’s winners Hisanori Kitajima and Mirriam Wangari are back to defend. The race records were set in 2014, 2:11:18 by Gebo Burka and 2:29:42 by Biruktayit Eshetu, both of Ethiopia.

Upwards of 33,000 participants are expected in the marathon and associated events which make up the Sydney Running Festival.

The race will be broadcast live on Australia’s Ten network with a live stream here beginning at 06:00 local (GMT+10). Live coverage will also be provided in China for the first time.