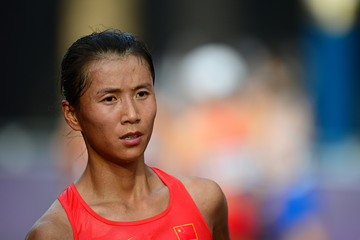 World record-holder Liu Hong and 2012 Olympic champion Chen Ding will return to the Chinese city of Taicang aiming to retain their 20km titles at the IAAF Race Walking Challenge meeting on Saturday (11).

Liu, the Olympic gold medallist and two-time world champion, recently returned to competition after a two-year maternity leave. But she has showed a solid form so far, grabbing 20km victories in January and February before cruising to a world 50km record of 3:59:15 at the Chinese Race Walk Grand Prix in March.

Liu also set the 20km world record of 1:24:38 in La Coruna four years ago, making her the first Chinese race walker to have two world records to her name.

Although she has not competed in the Race Walking Challenge in Taicang since 2013, Liu took the top honours in her previous two outings in 2011 and 2012. She will be targeting nothing but the top of the podium this time, especially since the race will also serve as the national trials for the IAAF World Athletics Championships Doha 2019.

As defending world champion, Yang Jiayu does not need to fight for her berth in Doha, so can take the race as another opportunity to fine-tune for the World Championships. Yang was on course to break Liu’s 20km world record at the Chinese Race Walk Grand Prix in Huangshan two months ago, but she quit the race with only six kilometres to go.

The 23-year-old, whose PB of 1:26:18 was set when winning the world title, explained she was just taking the race as a training session, trying to find a rhythm in the race without paying too much attention to the clock. She admitted missing the chance to break the record was a pity, but added that she still has a chance to break it in future races.

Competing alongside the world record-holder for the first time since making her name known to the world may provide extra motivation for Yang to better explore her potential.

Qieyang Shijie, world ranked No.1, is another woman to watch on Saturday. The 28-year-old clocked her career best of 1:25:16 at the 2012 Olympic Games but has remained consistent in recent years. She topped the Race Walking Challenge standings last year and remains unbeaten so far this season with victories in Huangshan and Rio Maior.

The Chinese contingent also includes 2015 world silver medallist Lu Xiuzhi, winner in Taicang in 2017, and world U20 and Youth Olympic champion Ma Zhenxia, who recently improved her PB to 1:28:28 at the Asian Race Walking Championships in March.

The 26-year-old Chen, who won the men’s 20km gold medal at the 2012 Olympic Games in London, has been off the radar since the Chinese National Games in September 2017. He returned to action in March at the National Race Walking Grand Prix, but failed to finish his first race in 16 months.

Chen may not be the most in-form race walker toeing the line, but he is more than familiar with the course in the eastern Chinese city. He first competed in Taicang in 2011 and has taken part in five editions of the race. He claimed the title four years ago in 1:19:53 and set his PB of 1:17:40 in Taicang in 2012.

Caio Bonfim is another former winner returning to Taicang. The 28-year-old Brazilian 20km record-holder scored a 1:22:16 victory in 2017, four months before improving his lifetime best to 1:19:04 en route to his third-place finish at the World Championships in London.

Sweden’s Perseus Karlstrom is also a serious title contender. He is undefeated this season with victories at the Oceania 20km Race Walking Championships and IAAF Race Walking Challenge in Lazaro Cardenas, Mexico. He has competed twice at the Taicang event, finishing third in 2016.

With a PB of 1:17:26, Japan’s Eiki Takahashi is the fastest entrant on paper. He recorded that time last year in Kobe, where he has won five titles in a row since 2015, but he hasn’t been quite so consistent when racing abroad.