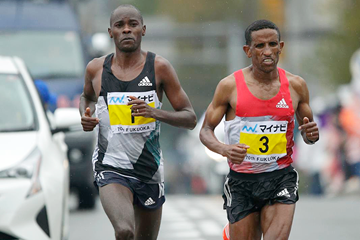 Yemane Tsegaye of Ethiopia returns to defend his title at the 71st Fukuoka International Marathon, an IAAF Gold Label Road Race, on Sunday (3).

Tsegaye recorded his personal best of 2:04:48 at the 2012 Rotterdam Marathon, and has a silver medal from the IAAF World Championships Beijing 2015 to his credit. Last December, the 32-year-odld prevented Patrick Makau from winning a third successive Fukuoka title.

“My preparation for the race has gone well,” Tsegaye said at the pre-race press conference. “I am fully confident for Sunday’s race.”

He'll be aiming to regroup from a sub-par 2017 season in which he finished a distant 12th at the Boston Marathon, clocking 2:16:47. He did not finish August’s World Championship race in London, his most recent outing.

Tsegaye’s main competitors include Steven Kiprotich of Uganda, the 2012 Olympic and 2013 world champion, and Bedan Karoki, a Kenyan who lives in Japan and runs for the DeNA corporate team led by four-time Fukuoka champion Toshihiko Seko.

Speaking at the press conference, Kiprotich fondly recalled his race at the 2006 World Cross Country Championships in Fukuoka. “I ran the junior race and was beaten by a Japanese runner (Tsuyoshi Ugachi),” he said.

Turning his attention to Sunday, he said, “My preparation has gone well. If the weather is good, my goal is a personal best.”

The 28-year-old Kiprotich produced his lifetime best of 2:06:33 in Japan with his runner-up finish in Tokyo in 2015. In April's Hamburg Marathon, his most recent race over the distance, he finished second in 2:07:31.

Historically Kenyans living in Japan have run well in the Fukuoka Marathon. Martin Mathathi won in 2013, Joseph Gitau in 2012, and Josephat Ndambiri in 2011. Earlier, 2008 Olympic champion Samuel Wanjiru won in 2007 in his marathon debut.

Karoki will be running his second marathon, following up on a successful debut at April’s London Marathon where he finished third in 2:07:41.

“My training for this race has gone better than before London,” Karoki said. “I hope to record a personal best. Ideally, I want to go with three minute per kilometre pace until 30-K and then pick up the pace from there.”

Karoki’s great accomplishments at shorter distances are well documented. He has a 10,000m best of 26:52.12 and a half marathon best of 59:10, both recorded earlier this year. He won silver medals at the 2016 World Half Marathon Championships and the 2015 World Cross Country Championships. He ran the 10,000m in the last two Olympic Games as well as the last three World Championships and always finished close to a medal, but was always left empty-handed. His medal hopes may lie at the marathon distance.

Other invited runners from abroad include Kenyan Lani Rutto, with personal best of 2:06:34 and Eritrea’s Amanuel Mesel, with the best of 2:08:17. Sondre Nordstad Moen of Norway may be the runner to watch after his strong 59:48 half marathon performance in Valenca in October. His marathon best is 2:10:07 from the 2017 Hannover Marathon.

Like the Saitama Marathon three weeks ago, the contest doubles as the selection race for the 2018 Asian Games marathon team. It is also one of the qualifying races for the Tokyo 2020 Olympic Marathon team Trials. In order to qualify to run in the trials from the Fukuoka Marathon, a runner must finish in the top-three among Japanese with the time under 2:11. Runners can also qualify by running a time under 2:10 provided they finish in the top-six (but not necessarily top-three) Japanese positions.

Perhaps the best Japanese is Surugu Osako, the national record holder at 3000m and 5000m. He is also a two-time national 10,000m champion and 2016 national 5000m champion at 5000m who contested both distances at the 2016 Olympic Games. He ventured into the marathon in Boston this year where he finished third with 2:10:28. The race confirmed his talent for the distance, making his Fukuoka appearance an eagerly anticipated one.

“In the Marathon Majors races, it will be hard to be competitive at my stage of marathon development,” said Osako, who recently returned from a month-long high altitude training stint in Boulder, Colorado. “But Fukuoka is a race I can win. I want to be competitive all the way to the end of the race.”

Although not invited runners, two domestic entrants stand out: Yuta Shitara and Daichi Kamino. The latter is almost a household name, for he is well known for his magnificent run in the mountain climb stage of Collegiate Ekiden, also known as Hakone Ekiden, which takes place on 2 and 3 January each year. Although Kamino has previously said that his goal was to set a national record on his debut, at the press conference he was more realistic. “I have done everything I can for this race. My goal for the Sunday is 2:08:59.”

Of course, Fukuoka would not be complete without the prolific marathon runner Yuki Kawauchi. He’s run the race seven times, with a third place finish in 2:09:05 in 2013 his best showing. Last year, he was third with 2:09:11.

“My goal is to finish in top three,” he said. “Although it will be nice to set a new personal best, but for me the position is more important than the time.”

Other invited domestic runners are Satoru Sasaki with a best of 2:08:56; Takuya Fukatsu with a best of 2:09:31; and Hayato Sonoda, who’s clocked 2:10:40. Sasaki finished 17th at the Rio Olympics while the unheralded Sonoda was fourth in Fukuoka last year.