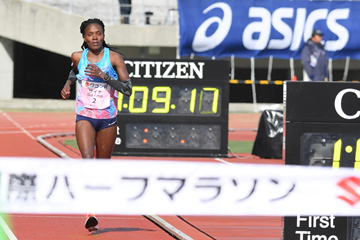 Waweru and Saina return to defend Marugame half marathon titles

Edward Waweru and Betsy Saina will return to defend their crowns at the 73rd Kagawa Marugame Half Marathon, an IAAF Silver Label road race, on Sunday (3).

Edward Waweru, a Kenyan who lives in Japan and runs for the corporate team NTN, won last year's race in 1:00:30, a personal best. At the New Year Ekiden, Waweru was only 34th in the race's second stage, indicating he may not be in shape similar to that of last year.

His toughest competition is Geoffrey Kirui, the 2017 world champion in the marathon. Kiriu, who also won the Boston Marathon in 2017, has a half marathon best of 59:38 from 2015 and a 2:06:27 best over the classic distance. He's cracked 60 minutes twice over the distance.

The second and third fastest runners in the field are Shadrack Kiplagat with a best of 1:00:06 and Evans Cheruiyot who has clocked 1:00:26. Both recorded their best last year, Kiplagat in Prague and Cheruiyot in Istanbul. Among the Japanese, Kenta Murayama is the leading Japanese entrant. He has a lifetime best of 1:00:50 and was third in this race last year.

The best Japanese may be Ayuko Suzuki who was 10th at 10,000m at the World Championships in 2017. She has marathon best of 2:28:32 from hot Hokkaido Marathon last August, but she does not have any half marathon times on record.

Several runners who will be contesing the Tokyo Marathon four weeks later will be on the start line on Sunday. On the men’s side they include Kenta Murayama who has a best of 1:00:50, Shohei Otsuka (1:02:32) and Yuki Sato (1:02:33).