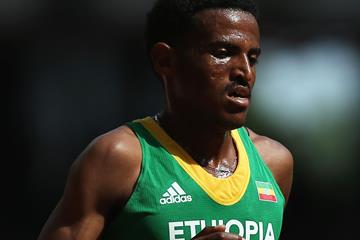 Whenever Mo Farah was due to compete over 5000m at a major championships, you’d at least have an idea of how the race would play out. But in Doha, in what will be the first World Championships 5000m final since 2005 without the six-time world champion, the men’s 5000m is difficult to predict.

Yomif Kejelcha and Joshua Cheptegei – the only men to win more than one 3000m/5000m race on this year’s IAAF Diamond League circuit – will be focusing on just the 10,000m in Doha, which throws the 5000m even more wide open.

Several of the athletes entered will also be doubling up in either the 1500m or 10,000m, but the 5000m comes first on the schedule, meaning everyone will be going into it fresh. So that’s something.

Telahun Haile Bekele leads this year’s world list following his 12:52.98 victory at the IAAF Diamond League meeting in Rome. He followed it three days later with another sub-13-minute clocking to win Hengelo, but was then beaten in his other races at the distance, finishing third in Lausanne and fourth in Zurich.

The Ethiopian’s only prior major championships experience was last year’s World U20 Championships where he finished fifth, albeit against a stacked field.

Compatriot Selemon Barega hasn’t won any races over 5000m this year but has consistently featured near the front of the pack, placing second in Shanghai, Rome and Lausanne before finishing fifth at the IAAF Diamond League final in 12:59.66.

Apart from his lap-counting blunder in Lausanne, Hagos Gebrhiwet has also had a consistent season. He clocked a 5000m season’s best of 12:54.92 in Rome and ran a 10,000m PB of 26:48.95 in Hengelo to win the Ethiopian Trial race and guarantee his selection for that discipline too. After taking world silver in 2013 and bronze in 2015, the 25-year-old Ethiopian will be keen to complete his set of medals with gold in Doha.

Muktar Edris isn’t quite in the same form that carried him to a surprise gold in London two years ago, ending Farah’s streak of major track titles. In his only 5000m race of the year, he finished 18th in Lausanne in 13:29.53, but he showed slightly better form in Szekesfehervar four days later to finish second over 3000m, beating Haile Bekele in the process.

Ethiopian athletes may top the entry list in this event, but there is another nation – correction: family – who is capable of challenging the East African nation.

All three Ingebrigtsen brothers – Henrik, Filip and Jakob – are entered for the 5000m and the younger two will be doubling in the 1500m. The precocious Jakob, the youngest of the Norwegian trio, perhaps carries the family’s strongest medal hopes. The typical championship middle-distance race perfectly suits his racing style, as he showed when racing to senior European 1500m and 5000m titles last year at the age of 18.

Filip, the world bronze medallist over 1500m, is also a contender and will be buoyed by setting a Norwegian mile record of 3:49.60 at the IAAF Diamond League meeting in London.

Paul Chelimo may not have won any races this year – he was even beaten at the US Championships – but having earned medals at the 2017 World Championships and 2016 Olympic Games, he can never be discounted.

Bahrain’s Birhanu Balew will return to the track on which he won the Asian 5000m title earlier this year. Since then, he has clocked a PB of 12:56.26 in Rome but was a distant 16th in Lausanne and 10th in Zurich.

Kenya hasn’t won the men’s world 5000m title since 2005, but 20-year-old Nicholas Kimeli will be hoping to end that drought. He has performed well on the circuit this year, topped by a 12:57.90 PB in Hengelo.

He is joined on the Kenyan team by two other relative newcomers: Michael Kibet and Daniel Simiu Ebenyo.