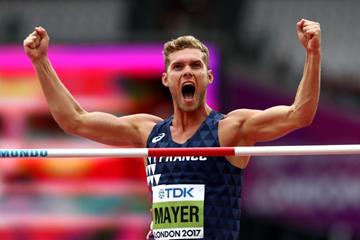 A year has passed since Kevin Mayer set his world record of 9126. Although he hasn’t contested a full decathlon so far in 2019, the indications are that the 27-year-old Frenchman is in even better form than last year.

But, as Mayer knows all too well, with 10 events come 10 opportunities for things to go wrong. A trio of fouls in the decathlon long jump at the European Championships last year resulted in a ‘DNF’ in Berlin, but was then the catalyst for his record-breaking performance in Talence five weeks later.

Provided he once again uses his Berlin experience as motivation and avoids any disasters, Mayer will start as the overwhelming favourite. He also stands to become just the third decathlete in history to win back-to-back world outdoor titles with a world indoor title in between. USA’s Ashton Eaton and Dan O’Brien – like Mayer, both world record-holders in their day – are the only other men to achieve that feat.

Damian Warner has been one of the world’s most consistent and formidable decathletes for eight years now, picking up four global medals along the way. Illness ruined the Canadian’s chances of a medal in London two years ago, but the 29-year-old rebounded with a Canadian record of 8795 last year in Götzis and returned to the Austrian town earlier this season to win his fourth Hypo-Meeting title with 8711, the second-best score of his career.

As well as setting a world decathlon best of 10.12 in the 100m and a shot put PB of 15.34m in Götzis, Warner cleared a pole vault best of 4.85m in June. More recently, he retained his Pan-American title in Lima with 8513 in conditions that were a stark contrast to what is expected in Doha.

The injury-hit German team is without European champion Arthur Abele and world silver medallist Rico Freimuth, but thankfully their enviable depth means they will still have some genuine medal hopes in Doha.

Niklas Kaul, the 2015 world U18 and 2016 world U20 champion, has continued his impressive rise to the senior ranks. Following a PB of 8336 to finish fourth in Götzis, he won the European U23 title with 8572, assisted by a monster 77.36m throw in the javelin. He threw even farther at the recent ISTAF meeting in Berlin, setting a PB of 78.49m. And he says there’s more to come.

With a season’s best of 8444, Kai Kazmirek has displayed similar form to his pre-World Championships shape of 2017. The 28-year-old German, who tends to perform well at major championships, came away from London with a bronze medal so will want to at least match that in Doha.

Combined events powerhouse Estonia will also be well represented in Doha. World indoor bronze medallist Maicel Uibo didn’t finish at the 2017 World Championships and 2018 European Championships but if he gets close to his PB of 8514, set last year when finishing second in Götzis, then the 26-year-old should be close to a medal.

Since finishing a surprise fourth in London two years ago with a PB of 8371, Janek Oiglane has had quite the journey before even stepping on the plane to Doha. Injury curtailed his 2018 campaign but he returned to action during the 2019 indoor season, only to suffer another injury in the heptathlon pole vault at the European Indoor Championships. He recuperated well, though, and won the national title with 8251 to qualify for Doha.

Johannes Erm, the top-scoring Estonian this year, decided against competing at the World Championships as he has already had a long season that has included six combined events competitions, three of which were championship events.