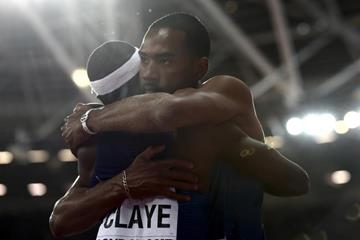 Will Claye and Christian Taylor congratulate each other after the triple jump at the IAAF World Championships London 2017 (Getty Images) © Copyright
22 SEP 2019 Preview Doha, Qatar

The triple jump rivalry between Christian Taylor and Will Claye may not be fully appreciated until both men are long retired.

The two US triple jumpers have been duelling for more than a decade now, spanning from their days as U20 athletes during their time as teammates at the University of Florida. They made their senior global debut at the 2011 IAAF World Championships in Daegu where Taylor won gold and Claye claimed bronze.

Since then, they have gone on to occupy the top two spots of the podium at three global championships, including the 2016 Olympic Games and 2017 World Championships. And if this year’s form is anything to go by, that looks to be a likely outcome yet again in Doha.

But while Taylor has the better championship record with his three world titles and two Olympic gold medals, Claye heads to Doha as the world leader and the newest member of the 18-metre club. The two-time world indoor champion sailed out to 18.14m at a low-key meeting in California in June but showed it wasn’t a one-off by jumping 18.06m to win at the IAAF Diamond League meeting in Paris at the end of August.

Excluding the US Championships, where Taylor intentionally ran through his one and only effort just to satisfy the USA’s selection criterion for defending world champions, Claye’s Paris performance is his only victory over Taylor this year. But Claye has consistently been the one to push Taylor throughout this season, resulting in Taylor’s biggest leaps of 2019, including a wind-assisted 17.93m in Szekesfehervar and a season’s best of 17.82m in Monaco.

Their career head-to-head record is even closer. Taylor has the edge in the triple jump, 26 to 23, but add in their long jump record and Claye has the advantage, 31 to 29.

Taylor, who sits second on the world all-time list with 18.21m, is one of the discipline’s greatest and most consistent exponents with a knack of pulling out the big jumps when it matters, but no other athlete in history has beaten Taylor as many times as Claye has.

Portugal’s Pedro Pablo Pichardo, the third Doha-bound 18-metre performer, is the only other man to have beaten Taylor this year. The two-time world silver medallist jumped a season’s best of 17.53m at the IAAF Diamond League meeting in London as Taylor finished second with 17.19m. More recently, however, Pichardo finished seventh at the IAAF Diamond League final in Brussels with 16.32m.

In London two years ago, the bronze medal was won with 17.19m. But given that 16 men in this year’s field have jumped farther than that this year, the standard will be closer to that of the 1997 World Championships where 17.59m wasn’t enough for a medal.

USA’s Omar Craddock has made something of a breakthrough this year, leaping 17.68m in April and going on to win at the Pan American Games and the IAAF Diamond League meeting in Rome. He will also be keen to make up for his last World Championships appearance in 2015 when he missed out on a medal by one place.

Hugues Fabrice Zango of Burkina Faso has had a solid season, jumping an outright African record of 17.58m during the indoor season and following it with a string of top-four finishes on the IAAF Diamond League circuit.

Over the past two years, Cuba’s Jordan Diaz has emerged as one of the most exciting young talents in the sport. He won the 2017 world U18 title with a world U18 best of 17.30m and extended that mark to 17.41m last year.

Still aged just 18 with another year as an U20 athlete, this year he jumped a PB of 17.49m, one centimetre shy of the world U20 record. Last month he took the silver medal behind Craddock at the Pan American Games with 17.38m. If he makes it on to the podium in Doha, he will become the youngest ever field event medallist at the World Championships.